Elephants have excellent memory, as they have to remember food and water sources hundreds of kilometres apart. This allows them to remember humans too. An elephant can either respond happily or be threatening depending on their memory of a person.

Elephants are considered to be one of the smartest animals in nature. The elephant’s brain is the largest of any land-dwelling animal and weighs about 5 kilograms on average. 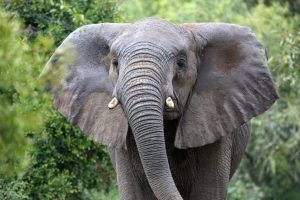 Blue whales are the only animal with a larger brain, but compared as a ratio to body size, the elephant’s brain is much larger proportionally. Some scientists consider elephants to be as smart as higher primates such as chimpanzees.

Range of emotions in elephants

We know that elephants can display a wide range of emotions. They feel empathy towards other elephants in their family group, and will grieve for a newly deceased elephant. For example, an elephant killed by poachers was guarded by the rest of the elephant group for several days. The elephants then buried the body in a shallow grave they had dug out. 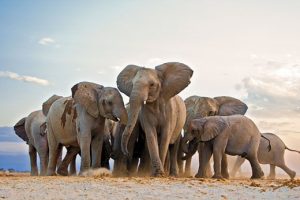 Elephants can recognise themselves when looking in a mirror, showing a high level of cognition and self-awareness.

The famous saying goes ‘elephants never forget’, but is it really true? It turns out elephants do have amazing memory. Some elephants have to rely on sources of food or water that are located hundreds of kilometres apart and are only available during specific parts of the season. The elephant family groups rely on their memory (and especially the memory of the leading female, or so-called matriarch) to guide them to these sources of food and water using minute landmarks and changes in the landscape. 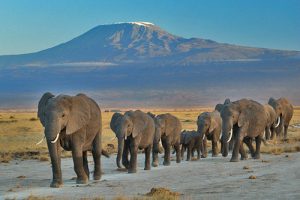 What about elephants’ memory when it comes to people? The captive elephants definitely remember people who look after them or who they work for. They will recognise and greet people they like, for example by flapping their ears or using their trunks to gently touch the person. Their good memory, however, also mean that they can remember people who were mean to them. There are stories about elephants turning aggressive or trying to avoid people dressed or smelling a certain way. This was exhibited by a group of captive elephants who would turn aggressive when approached by the members of a local tribe – they remembered that young men of this tribe used to attack them with spears as a part of a coming of age ceremony. The elephants were able to distinguish the members of this specific tribe from their clothes and body odour.

Researchers believe that elephants can produce 70 different vocal sounds and over 160 body language cues, which each contain specific meaning.

This means that elephants are able to communicate a wide range of information and emotions with their herd members. For example, one of the calls signals the end of a meal and urges the herd to move on with their journey to the next location. 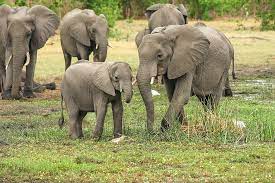 Some of these sounds are too low in frequency for the human ear to hear. It appears that the elephants use infrasonic (low frequency) calls to carry messages over very large distances. They use the calls to locate lost/separated family members. Males also use the calls during mating season to indicate their presence to females and other male rivals. 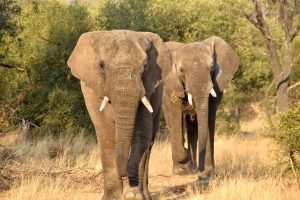 Elephants are one of the most amazing creatures on planet Earth. We are only starting to appreciate how smart they are and how diverse their means of communications are. 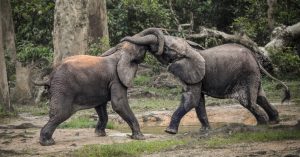 Many of the elephant species, specifically, the African savanna and African forest elephant, are critically endangered. Their numbers have been dwindling for the last few years due to ivory poaching and the loss of habitat. They deserve to be protected and studied to hopefully stabilise their numbers in the wild.

Animal-Club provides animal parties or animal handling workshop where your will be able to see, learn and interact with the wonderful animals with the help of our presenters. Our mobile zoo has many friendly animals such as rabbits, tarantulas, geckos, vinegaroons and more that will be perfect for an animal party. We can also come over to your school for an animal school visit or arrange for an animal workshop with us where the children can learn about animals and have fun too.