Yes, even though they’re known (and literally named) for pecking wood, they’re not actually eating it. When you think about it, they’d be far too weighed down to fly if they actually ate any wood.

So why do they peck wood?

Woodpeckers have a really good sense of hearing. Like, REALLY good. It’s estimated that they can hear a range of around 1.5 – 5.7 kHz. For context, human hearing spans about 2 – 5 kHz. So that’s woodpeckers 1, humanity 0. 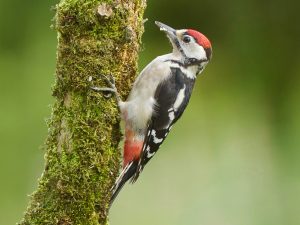 This extraordinary ability is how woodpeckers can hear insects under the surface of bark. Yep, you read that right. The clever little birds hear some grub crawling under the surface, use their powerful beaks to drill into the wood and then the woodpeckers eat their prize. Mother nature’s original power tools!

Isn’t that miraculous?! I can’t imagine being able to hear an insect at all, let alone through a layer of wood. Even ignoring this supernatural hearing ability, the fact they can bore into wood is unbelievable.

The force a woodpecker uses when pecking wood is astounding. 60-100 g’s (a very scientific unit of measurement known as g-force) is enough to give a human a concussion. Given this information, how many g’s do you think a woodpecker undergoes with each peck? 30? 40? Wrong, roughly between 1,200 and 1,400g’s. That’s 14 times what would give a whole human a concussion, with every. Single. Peck. 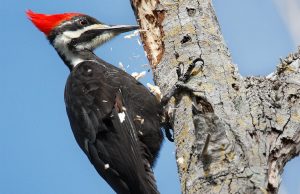 Are there any animals that do eat wood?

Now that we’ve established the disappointing truth that woodpeckers don’t consume wood, let’s talk about the creatures that do.

Perhaps the most famous example is the humble beaver. Not only do these funky little guys build dams out of the stuff, they eat wood too! Beaver teeth are very effective at chopping up wood which makes them ideal candidates for consumer of the oaky cuisine.

Other less obvious animals eat wood too though. Including, but not limited to: deer, moose and porcupines. Unfortunately wood is inedible to humans. We simply don’t have the necessary enzymes to break it down. In case you’re not a biologist, an enzyme is a special chemical that breaks something down (like gluten or fats being broken down in the stomach). ‘Lignophagia’ is a peculiar behaviour in some animals involving chewing and eating wood. It is an extension of the pica disorder which essentially means the desire to or act of consuming inedible substances. Humans can have pica and you may have seen some cases of this yourselves on the show ‘my strange addiction’ (think of the woman who ate mattresses!)

This doesn’t mean that ALL consumption of wood is abnormal, some animals such as the aforementioned beavers can genuinely eat and digest wood the same as a human eating a lovely burger.

In general, wood isn’t the most broadly consumed cuisine in the world but some animals do enjoy it and use it to survive. Despite this, humans are unable to eat wood and the titular woodpecker follows a similar fate.

So to answer the question ‘do woodpeckers eat wood’ once and for all, no, they just obliterate it with their beaks!