The end of giraffe tongues are dark in colour, ranging from blue and purple even to black. So, long story short, they’re a bit of both!

This little evolutionary quirk is quite unbelievable at first. It seems like something pulled straight out of Harry Potter, but we don’t have JK to blame for this. Perhaps even stranger, the backs of giraffe tongues are a lighter pink colour, similar to most other creatures. Very strange in deed.

So WHY are giraffe tongues blue?

Take a moment to appreciate the insanity of the giraffe. These 5m tall behemoths look like someone put a horse through a pasta extruder. I mean, really, which sounds more real : a horse with a horn, or a gigantic horse with stupidly long limbs and an even longer neck?! 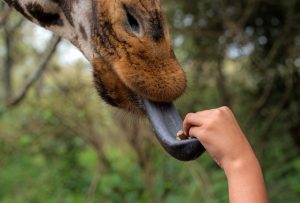 So, with this mindset, consider whether a blue tongue is truly so out of character for nature’s skyscrapers. At 50cm long, their tongues play a vital role in helping them feed up high. However, this height and usage means their poor licking implements are exposed to massive amounts of UV rays.

In layman’s terms, UV rays are sun beams. That’s an oversimplification, but for our purpose it will do. Native to the infamously sweltering continent of Africa, these big beasts needed a way to protect their sensitive tongues from the blazing sun.

That’s where melanin comes in. Giraffe tongues are densely packed with the stuff, which gives them a dark pigment. We’re not entirely sure this is the case, but the leading theory is that melanin helps block UV rays and therefore protect their tongues! Evolution strikes again!

Do any other animals have blue tongues

Surprisingly yes! Quite a few other creatures share this peculiar trait.

One particularly interesting example is the polar bear. Underneath their stunningly white fur, these albino grizzlies have black skin. This helps them to absorb and retain more heat, helping them stay warm in their frozen habitat. This pigmentation extends to their tongues, which are pink at birth but darken with age! 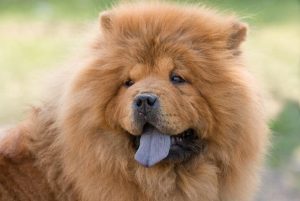 Looking more on the domestic side of the animal kingdom, we have the Chinese chow-chow. This big, fluffy breed of dog is characterised by, you guessed it, its remarkable blue tongue. Even more exciting, this tongue pigmentation is hereditary and even present in mixed chow-chows!

A very useful example comes to us in the form of the aptly named ‘bluetongued lizard.’ These little guys have bright blue tongues (shock, horror) with a slightly unexpected usage; intimidating predators!  Birds are able to clearly see UV light. Sadly, this results in their downfall. The tongue of the blue tongued lizard is particularly bright under UV light, which makes it quite distracting for birds. Couple that with the tongue’s massive size, and you’ve got a pretty intimidating display. 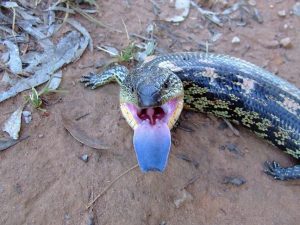 Now that we’ve covered an array of blue tongued creatures, it might make you want to drink a blue raspberry slush puppy to mimic the awesome evolutionary feat. But don’t be too hasty, we may not have blue tongues like a giraffe but at least we’re not 17 foot tall, lanky nightmare horses.