The age old question finally answered; are koalas stupid? Yeah, they are, and that’s what makes them so cute!

There are lots of things that make koalas stand out from the rest of the animal kingdom. For example they have poor eye sight but make up for this with excellent senses of smell and hearing. These allow them to be excellent at detecting both predators and ripe/ideal food sources. At the same time, their most unique feature is their sub-par intelligence.

But WHY are koalas stupid? Let’s discuss.

Why are koalas stupid?

Let’s begin with some biology. Koalas have one of the lowest brain to body mass ratios of any mammal. There brains are also almost entirely smooth, meaning their cognitive abilities are few and far between. For example, koalas eat eucalyptus leaves. Naturally, they do this directly from the branches. If you were to pick some eucalyptus leaves off of the tree and hand them directly to the koala, it would not accept them. It wouldn’t recognise them as food even if it watched you gather them.

Similarly, they have no concept of what rain is. Most animals, when getting drenched in rain, would run for shelter to protect themselves. Not the humble koala, which simply sits in the rain wondering why it’s getting wet.

Almost laughably, the mere fact that they eat eucalyptus leaves is stupid. A koala’s diet consists primarily of these leaves, and yet they have little to no nutritional value. They also contain little to no calories and are quite literally poisonous. You heard that right. Koalas have had to adapt specifically to be able to consume them, and yet haven’t adapted to eat anything more substantial or beneficial.

In fact, expending little to no energy is part of their survival tactics. By having small, smooth brains they don’t use much energy with silly, pointless things like thought or spatial awareness and can instead conserve the extremely small amount of energy they gain from their diet of nutrients-devout poison.

For more answers to “are koalas stupid” read this blog from the University of Melbourne.

Let’s begin with Komodo dragons, which can eat 80% of their own body weight in one sitting. They don’t know when to stop eating and can end up eating so much that they are significantly slowed down. If a predator comes at them while they are in this state, they throw up the contents of their stomach so that they can escape. In a way, this is quite smart as the predator may decide to cut its losses and eat the vomit. At the same time, the massive lizard could simply eat less to begin with and avoid the problem all together. 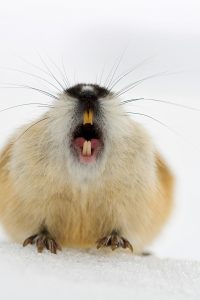 Lemmings must be mentioned, considering their infamous status as stupid. Lemmings, which stand at a mighty 6 inches long, often fight cats, birds of prey etc. when the need arises. They fight using their large front teeth, something the predator will have definitely noticed prior to the fight thanks to the lemming’s large, distinctive cheeks. A true marvel of evolution, is the lemming.