No, despite being named after the big cat, leopard sharks are not related to leopards. They are named after leopards because of their spots.

As I’ve already said, the fact that leopard sharks share the same title as the famous spotty cat doesn’t mean they are one in the same. The most likely story is that scientists discovered the titular shark and thought “looks like leopard that does!” 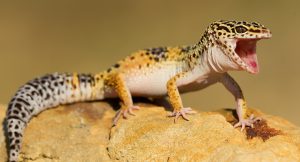 But what about leopard geckos? Are they related to leopards? Sadly, the answer to that question is also no, the name comes down to the similar patterns of the creatures.

Are there any other similarities?

I feel that before we get into what links these two animals, we should first ask what’s different. Well, for a start, one’s aquatic and one’s a mammal (I’ll let you work out which one’s which).

Another peculiar difference is the sizes of these animals. My first instinct was that the shark would be much heftier and larger than the cat, but i was wrong. Leopard sharks clock in at an average of 5ft and 40lbs, whereas leopards themselves reach a whopping 6ft (excluding the almost 3ft tail!) and around 160lbs. 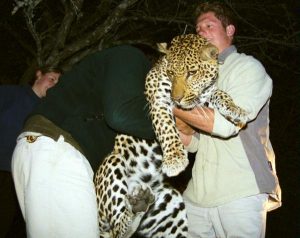 Obviously disregarding several other differences such as fur vs scales and countless others, let’s get into the similarities.

Both of these magnificent beasts are carnivorous, meaning they eat exclusively meat/other animals.

Of course, as stated above, both of these animals are a sort of beige colour and littered with thousands of dark splotches; possibly the most iconic feature of the leopard and the reason for the leopard sharks name.

Last but definitely not least considering it inspired this article, leopard sharks and leopards share a name (shock and awe across the audience, the crowd goes wild.)

Other animals named after existing species

Surprisingly, this seems to be the case for a lot of creatures across the animal kingdom. Seems like scientists like to play spot the difference with new and old discoveries (while it’s technically ‘spot the similarity’, that didn’t have the same ring to it).

Take the butterfly fish, aptly named for its variety of spots, colours and other patterns reminiscent of that of the humble butterfly.

Another iconic example is the catfish which, as I’m sure you’ve guessed, is named after cats. What is it with biologists naming sea creatures after felines?! The reason for this name is the fish’s long feelers (or barbels) that sprout near their mouths, resembling the whiskers of a cat.

Perhaps the most well known of all the creatures in this niche group, the sheepdog is named in accordance with it’s historical role on a farm, that being: herding sheep! These lovely mutts are brilliant at rounding herds of nature’s walking cloud into pens, greatly assisting their owner. Nowadays any sheepdog owner (myself included) will tell you all they do is eat, sleep and run around, delightful companions nonetheless! The bane of every beachgoer across the globe, horseflies are of course named after the mighty horse. No, tiny little people don’t ride on their backs, they simply used to bite horses and other livestock.