Orangutans are typically less aggressive than other monkey species. This is because male orangutans live solitary lives, so are much less likely to have to compete with other males for resources. They only mate for a few days at a time, reducing competition for female orangutans.

Most monkey species have aggressive males due to the competition between them for females. However, male orangutans are much less aggressive, mostly due to their social structures.

Adult female orangutans stay close to their mothers even once they are fully grown, observing their mothers having new babies. This teaches them how to raise young. The females are then ready to have their own babies in their teens. 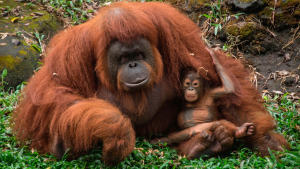 However, the males live alone. When they reach puberty (at about 8 years old) the males will leave their mother to search for females and their own territory. They live solitary lives, making new nests in the trees each night out of leaves and branches. When they find a female who is ready to mate, they stay with her for a few days. They then disappear back into their solitude. 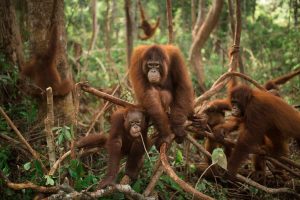 This structure causes reduced aggression between males, as they are much less likely to group around females. However, males are still aggressive towards one another if they are competing for female attention.

Aggression when competing for female orangutans

Most aggressive behaviour between orangutans is seen between two mature males competing for females. 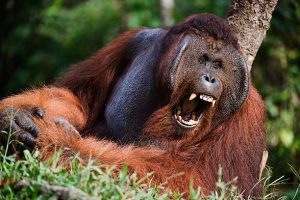 When fighting for female attention, the males will bite, scratch and wrestle. These fights can cause bad injuries, and occasionally even death of one of the males. Mature male orangutans therefore typically have missing fingers, healed bone fractures, missing eyes, and copious scarring.

Factors reducing aggression in the wild

Other than competitive fighting, male orangutans also have natural responses to other males. As male orangutans reach sexual maturity, they develop thick cheek pads and vocal chord sacs. These allow them to make a loud, roaring sound called a long call. As well as advertising to females that they are available for mating, the long call repels and physically affects other males. 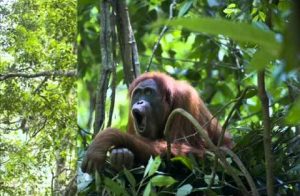 In response to a long call by a mature male, young male orangutans release stress hormones. These hormones reduce testosterone production, reducing their growth and preventing development of their own cheek pads and vocal chord sacs.

Because of this natural response, there is typically only one fully mature male orangutan in an area. The other males, with their stunted growth, are unable to compete with him. This greatly reduces aggression between males. 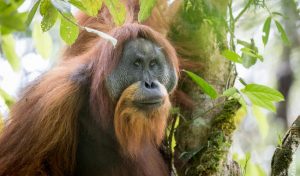 Although aggression between male orangutans attracts females, the females are careful to avoid males who always have an aggressive temperament.

Aggression between orangutans in captivity

Some orangutans show aggression when put in the restrictive environment of the zoo. Some of this aggression is simply due to boredom, and orangutans will fight just for mental stimulation. The common issue with captive orangutans is that they are placed in groups which do not necessarily match natural social structure in the wild. For example, the males are not allowed to live their typical solitary lives. This results in heightened competition between orangutans. 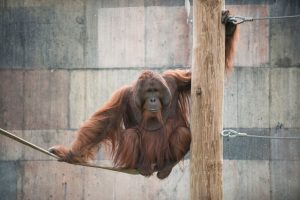