Movies have taught us that a panda is capable of martial arts but i want to know, can orangutans do kung fu? This seems trivial and silly, but there’s a surprising amount of stuff to talk about!

By now, you may be scoffing at the thought of this. Orangutans are big gangly primates with beer bellies that seem like the antithesis of a martial artist. That’s what they want you to think! Orangutans are actually pretty capable fighters and definitely not to be crossed.

How do orangutans do kung fu?

I won’t sit here and try to tell you that an orangutan could put you in a devastating sleeper hold or floor you with Bruce Lee’s patented ‘straight blast’. What i am going to tell you is that these big orange sweethearts are a lot less sweet than you might think. For starters, an orangutan is capable of lifting 500lbs. For reference, that’s the same as either half a grand piano, 5 toilets or 3 orangutans. Isn’t that insane! They’re around 5-7 times stronger than humans which would make them formidable opponents in a fight for sure.

On top of this, they have a bite force of 575 PSI (4 times that of a human). This is only slightly less than a lion, a creature famous for its immense biting power. 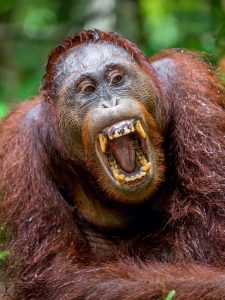 Hopefully these facts put into perspective how dangerous of an opponent an orangutan could be. So, can orangutans do kung fu? Not really but they could certainly hold their own!

Can any animals do kung fu?

A peculiar question to say the least, but since it’s on theme for this blog I’ll do my best to answer it.

The five traditional animal forms of Shaolin kung fu are the dragon, snake, tiger, leopard and crane. So it seems fitting to go through these five and see if the animals themselves could reasonably do kung fu.

Starting with an easy one; dragons sadly aren’t real and therefore cannot do kung fu, sorry!

Snakes are an interesting one, as the snake form focuses on the fluidity of a snake and its nimble nature. Of course, snakes possess a total of 0 limbs and would therefore struggle to win any martial arts tournaments. To learn more about this form, watch this very informative (and slightly strange) video from ExpertVillage Leaf Group on YouTube:

Now on to tigers. This style of kung fu is both nimble and powerful, a deadly combination similar to its namesake. Sadly, considering they walk on all fours i think you would be hard pressed to find a tiger able of carrying out accurate kung fu moves.

The same, sadly, goes for leopards, considering they are also quadrupedal big cats.

Lastly, we have cranes. The crane form involves rapid hand movements and powerful pressure point attacks, similar to how a crane may use its beak. That being said, and I think you know where I’m going, a crane can’t REALLY do proper Kung fu. Bummer, i know.

A disappointing result but not a shocking one. Animals can be vicious and effective fighters but they don’t often invent special moves and forms that can be practiced, perfected and taught to others in the same way as humans. What else is Dreamworks lying about !