The simple (and hopefully obvious) answer to ‘could a hamster kill me’ is no, easy as that. These teeny tiny rodents don’t pose much of a threat to humans outside of the occasional little nip or scratch when scared.

Actually, hamsters don’t post much of a threat to ANYTHING. With the small exception of insects and small frogs/lizards that get munched up by wild hamsters. The cute little guys have a diet mostly consisting of seeds, grains, nuts, fruits and vegetables. Just wee little harmless vegetarians!

How dangerous is a hamster?

Personally, the only way I imagine someone could die at the hands of a hamster would be if they choked on it. This feels unlikely though, so for now we’ll stick with the idea that hamsters don’t have a life threatening presence.

As stated above, they do have small claws and little teeth that could, under stress or fear, be used offensively. Furthermore, their bottom teeth are shockingly long and a bit unnerving. That is until you remember that the hamster itself can fit in the palm of your hand. 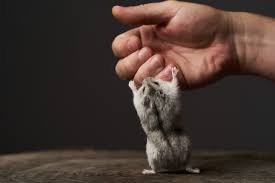 Much like humans, hamsters have both incisors and molars, for tearing and chewing respectively. The molars are found in their cheeks, famous for their ability to expand for food storage. However, the long, scary ones we’re interested in are found at the front of the mouth and are used for grooming, grabbing found and biting.

Like i said before, you must remember how little these animals are. The existence of long, pointy incisors used to bite you may seem scary, but they’re only a couple of centimetres long! Realistically, the hamster is a prey animal and has evolved as such; with little to no ability to kill other creatures beyond those so small even a little hamster can eat them!

How does a hamster defend itself?

First of all, let’s talk about the natural predators of the hamster. They have a frighteningly long list of predators that includes owls, snakes and a variety of mammalian carnivores. Katniss Everdeen probably had an easier time surviving than a hamster in the wild, the odds certainly aren’t forever in their favour.

To give the humble rodent some credit, let’s look at its defence mechanisms. Hamster’s are excellent borrowers and aren’t afraid of running away from confrontation. In most situations, this combo keeps them out of harms way by literally keeping themselves out of reach of predators.

But what happens when confrontation is unavoidable? Hamsters often take up aggressive behaviours in an attempt to intimidate any potential attackers before a fight takes place. This includes baring their teeth, standing upright and sometimes hissing. 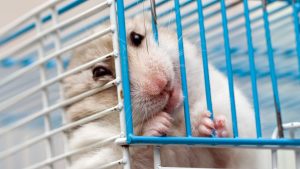 As an absolute last resort, a hamster will bite an attacker in order to defend itself. Hamsters are aware of their lack of power and will tend to either run away or attempt to scare off foes before they get violent.

A hamsters bite is nothing to scoff at, those disproportionately gigantic incisors pack a punch to smaller foes than humans that may be trying to eat the poor little guy.

But, despite these impressive defence mechanisms and seemingly giant teeth, the answer to ‘could a hamster kill me’ is still definitively no.