Yes, hippos are surprisingly deadly creatures with several features aiding their ability to kill, read on to see why and how a hippo kills.

Every year around 500 people are killed by hippos in Africa. This number might be shocking at first, but these seemingly docile creatures are quite vicious. Between their gigantic bodies and immense biting power, there’s much to be afraid of. The real questions are why and how they would bother killing a human.

How could a hippo kill me?

Now that we’ve established that hippos can and will kill, lets discuss HOW. Despite seeming like an exceptionally chunky animal, hippos only have 2% body fat. This means that they are 2000 kilos of mostly muscle wrapped in skin as thick as 6 centimetres.

This gigantic muscle mass makes them very strong and powerful, but the added weight doesn’t slow them down. If you had to guess their top speed, what would you say? 10 kilometres per hour? Maybe 15? How about a whopping 30kmh over short distances. To put that in perspective, the average human can SPRINT at only 32kmh, a mere 2 kilometres more than a hippo per hour. There goes any chance of out running the humongous beasts. 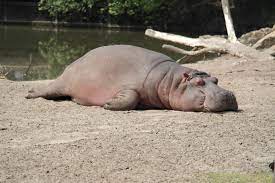 An interesting thing to consider is that hippos, in all their ferocity, are herbivores and do not, in fact, eat meat. The main reason hippos kill is over territory; male hippopotami are fiercely territorial and will attack anything and everything that threatens their ‘land’.

Speaking of land, hippos are semi-aquatic, meaning you’re not safe in or out of water. One weakness of the mighty hippopotamus is it can neither swim nor float in water, instead ‘walking’. Despite this, they still pose a massive threat in bodies of water even with reduced mobility. 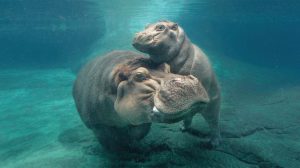 These factors are dangerous, but lets talk about the MOST deadly feature of the hippo, its bite.

How strong is a hippo’s bite?

No seriously, that may seem like exaggeration but the bite of a hippo averages out at 1800psi. For all of us none sciency people, that’s enough power to snap a crocodile cleanly in half.

Yeah, you read that right, hippos can, in one bite, completely separate a crocodile into two pieces. For even more context, a human skull can be completely crushed game of thrones style with 2,300 newtons of force, hippos are capable of biting with an unbelievable 8,100 newtons.

For more proof, one simply has to turn to youtube where a countless amount of videos can be found of hippopotami totally obliterating entire watermelons in one clean chomp. Watermelons have a relatively similar density to human heads, which we’ve established are no obstacle for a hippo’s gaping maw. 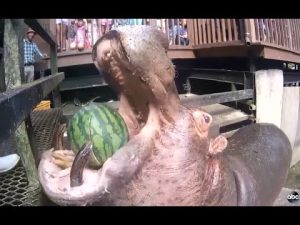 Many of these facts make hippos seem like possibly the most dangerous creatures alive. The problem is, they are just that. Looking at several lists and ranking systems across the web, one can find that these tremendous beast average out at the 12th most deadly animal on the planet to humans.

So, to cut a long story short, stay as far away from hippos as possible and only approach them if you fancy having a two dimensional head.