Yes, while the idea seems completely insane, videos can be found showing showing a seagull eat a rabbit whole, but why?

As anyone whose ever been to Skegness will tell you, seagulls aren’t the most fussy eaters. From chips and the ice creams of 5 year olds to mice and insects, they’ll eat just about anything.

So, if their feeding patterns are so irregular anyway, what’s so special about this example? Well, unlike those other small foods, the example in question depicts a seagull choking back a rabbit not much smaller than itself in one go.

Before we get started, click here to watch the shocking video for yourself:

What do seagulls usually eat?

Like i said before, seagulls really aren’t fussy when it comes to their dinner. They’re scavengers by nature and that gives them some flexibility in terms of what they can gobble up. As a general rule, when visiting the worlds biggest seafood buffet (the ocean), seagulls will eat just about anything they can find, dead or alive. They typical catch their snacks from the surface or land, they never really dive into the water itself. They must not want to get their perms wet.

During the colder months, seagulls will generally move more inland to warmer environments. Forever adaptable and not ones to lay down and starve, seagulls will typically eat human leftovers and other scavenged meals during this period. They can often be seen scouring farms and fields for small insects, rodents and anything else edible.

But HOW could a seagull eat a rabbit whole?

Enough beating round the bush, let’s talk about the rabbit shaped elephant in the room.

The question on at least my but I’m assuming EVERYONE’s mind is HOW. How could a seagull, not a giant bird by any means, swallow a rabbit in one go.

Well let’s get one thing straight, the specific type of seagull we’re talking about is the black backed gull. These birds can weigh up to 5lbs and have an average wingspan of about 5ft. Terrifying, and showing of the fact that they’re also not little, by any meaning of the word. 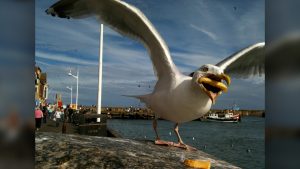 At least the monstrous size of this bird makes the previously mortifying feat of swallowing bugs bunny seem a little bit less unbelievable. A little bit.

An interesting fact i learnt whilst researching this topic is that a seagulls jaw is actually unhinge-able. This essentially allows them to open their mouth preposterously wide in order to eat what ever their little avian hearts desire. This helps combat the fact that they have no teeth or decent claws and are therefore quite unable to breakdown their food before swallowing. This leads to swallowing their meal whole often being the only option. Another factor to consider, is that workers at the Welsh nature preserve where the infamous video was taken have said that rabbits are actually a regular part of the birds’ diets. So it’s not as wild or peculiar as we may have originally thought.

So while it seems completely unfathomable that a seagull could eat a whole entire rabbit, it’s actually a common occurrence. And, when looking at the anatomy of these birds, it’s not completely unthinkable that they could swallow something so large.