Alligators often eat each other for a variety of reasons; whether it be territorial, for survival or something else entirely.

Alligators are infamously vicious apex predators that belong to a select group of animals that partake in cannibalism. This describes the act of an animal eating a member of the same species. It may seem pointless and cruel, but it has many survival benefits.

How common is cannibalism?

A surprisingly high amount of animals chow down on their own kind. For example, many female insects (such as preying mantises and black widow spiders) consume their mate either during or after reproducing with them to feed their newly developing babies. 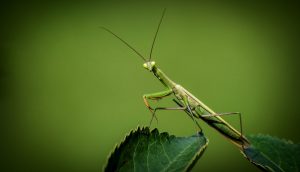 Cannibalism isn’t limited to just creepy crawlies however. Some aquatic animals such as shark embryos and shrimp eat one another to aid their own development. Shrimp eat the shells of other shrimp in order to gain the nutrients that they need to strengthen their own, for example.

There are even reports of certain land mammals such as great apes and hippos eating their own kind! Hippos are especially surprising as they are herbivores (meaning they usually only eat vegetation and not other animals.)

Cannibalism is often a last resort in dire conditions, with animals like hedgehogs (and alligators!) eating their own babies in environments such as droughts or when food is scarce. This is a survival instinct, they prioritise their own life which allows them to produce more offspring in the future.

Why do alligators eat one another?

So, getting back to the animal of the hour, it is widely reported that alligators eat each other, and biologists have many theories why. A common explanation is that they are whittling down competition for food and other resources. Less competition means more food with the added bonus of a big, scaly meal. 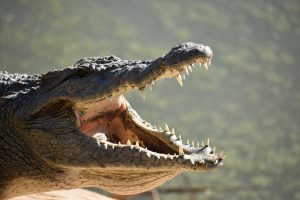 Adult alligators don’t just eat each other to prevent food shortages, they also compete for mates. For example, American male alligators are the most peckish for one another during mating season (between May and June). This is because they are trying remove any other potential candidates that female alligators may prefer.

Even though mature gators are sometimes victim to cannibalism, the ones that often pull the short end of the straw are the babies. They are eaten by their mothers when their isn’t enough food or water to go around (as mentioned above) or when she can no longer care for them. 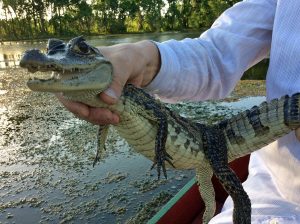 Biologists say that male alligators feel little to no compassion for their offspring, which may be because of multiple paternity. This essentially means that female alligators can lay a clutch of eggs fertilised by different males. As a result, they often struggle to discern which babies are theirs.

Babies are eaten more because not only are they defenceless but they also have softer, more fragile bodies that are much easier to eat than their adult counterparts. This makes them more desirable prey for adults with the munchies.

Alligator mothers don’t just put their babies in their mouths when they want a snack, they also put them in there to keep them safe. There are several accounts of gator mums carrying their young to bodies of water this way. It’s an innovative use of their remarkably powerful jaw and shows how intelligent they are.