Whether an animal gets bored depends mostly on their intelligence and natural behaviours. Generally, it is only mammals that get bored, causing them to look for ways to learn about their environment. Although other animals benefit from learning, they don’t get bored when they stay in the same place for the same time or repeat the same routine.

Why do animals get bored?

Mammals become bored when they stop learning about their environment or stop having new experiences. Scientists theorise that mammals evolved this way to be prompted to explore, to find more suitable habitats or richer food sources.

However, this doesn’t mean mammals are constantly bored. Most animals in the wild are constantly busy with activities necessary for their survival, and don’t have enough time to sit idly and become bored.

Different mammals also have varying levels of curiosity, which also links to the idea of evolution. A horse surrounded by field of grass won’t necessarily benefit from exploring to find new fields. Predators are more likely to become bored, since they must explore to find the habitats of their prey.

Do pets get bored?

You may have noticed your pet appearing to be bored, lazing around all day. However, it’s difficult to determine whether they feel boredom in the same way as humans.

One main piece of evidence suggesting pets become bored is when they show a stereotypy. These are behaviours in pets which are abnormal when compared to similar animals in the wild, and do not have a clear goal or function. You may have noticed your dog pointlessly wriggle around on the floor when you’re not giving them much attention. Obviously, this isn’t something wolves in the wild would do to survive, your dog is simply combatting its boredom. 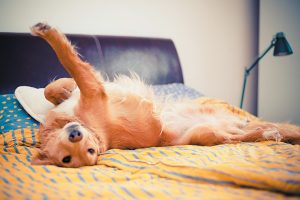 Other signs of boredom in pets is reacting in overdramatic ways to small stimuli. This could be running around the house and making lots of noise from a knock on the door, or a car driving by. They also might jump on your or restlessly fight for your attention.

How to stop your pets getting bored

Preventing your pet from getting bored largely depends on the species.

Most pets will benefit from mentally stimulating games, like puzzle toys with hidden treats. You could hide their toys and treats around the house to encourage them to explore. You could also play together, like a game of hide and seek or tug of war. 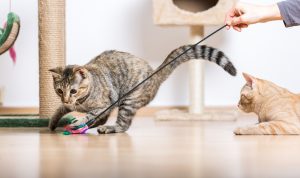 Another option is to teach your pet to do tricks. This strengthens your bond with your pet, and gives them a mental challenge. It also benefits pets to have a sense of achievement when they learn a trick correctly.

If your dog always seems restless, it may be that you aren’t giving them enough physical exercise. Breeds such as Border Collies or Boxers need a minimum of 2 hours of exercise every day! Adding in more vigorous exercise like chasing a ball or flying disk will tire out any dog. 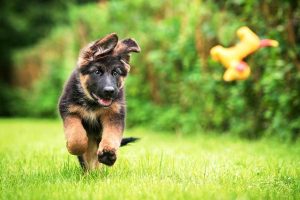 Do zoo animals get bored?

Similar to pets, zoo animals show stereotyped behaviours, suggesting they become bored. For example, an elephant may idly sway its trunk and rock from side to side in its enclosure. These behaviours are seen in many species. To combat this, may zoos give their animals a large enclosure with toys or natural objects for mental stimulation. 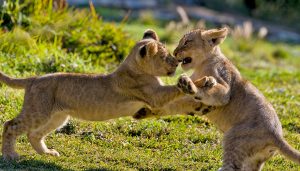