Despite many alleged sightings, images and claims of their existence , blue flamingos do not in fact exist.

The idea of blue flamingos is quite magical and awe inspiring, which is probably what lead to the widespread belief that they exist. While it is disappointing that they don’t, flamingo colourings are extremely interesting on their own account. Other made up flamingo colours include green and black, both of which seem logical but sadly aren’t real. 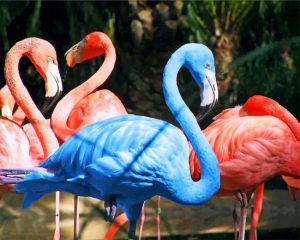 So why are flamingoes pink?

A little known (and actually true) fact about flamingos is that they are not born pink, but white. A flamingo’s diet consists primarily of brine shrimp, which in turn eat microscopic algae. This algae contains ‘carotenoids’ which give carrots their orange colour and turn ripe tomatoes red. They are also the reason that flamingos turn pink as they mature; the more shrimp they eat, the more pink they become.

Unfortunately this does not mean that, given the right food, flamingos could turn blue.  When they eat either the brine shrimp or the algae, they only metabolise the carotenoids and therefore only adopt the pinkish colours.

Flamingos come in a wide variety of hues ranging all the way from crimson to pale pink. They also often have shimmers of orange and peachy tones near their legs and wingtips. This means they’re a stunningly beautiful bird to look at, containing colours that aren’t often seen in other birds, or any other animals for that matter. 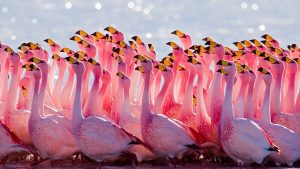 Another common misconception about flamingos is that their egg yolks or faeces are also pink, which they are not. This probably stems from the belief that the carotenoids transfer into the bird’s secretions, but this simply isn’t the case.

Which animals can be blue?

For the most part, the only blue members of the animal kingdom are fish, birds, amphibians and insects. The major exceptions to this trend are whales, with the very fittingly named ‘blue whale’ proving this. Certain monkeys and felines have black hues that resemble blue but aren’t quite as vibrant as other categories of animal.

Common examples of blue birds are, well, bluebirds, but also blue jays, Indian peafowls and macaws. Male birds usually evolve to have brightly coloured feathers in order to woo females, as is the case with peacocks. Blue pigments are a very regular sight in these displays.

There are actually quite a few other blue birds such as the blue footed boobie. Their feet are a brilliant blue colour (shocking, i know) which comes from the fish that they eat. This may have played a part in the blue flamingo hoax! 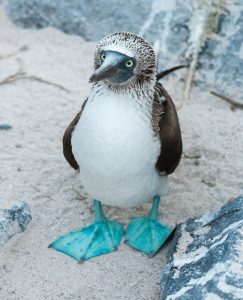 The blue amphibian population is best represented by the poison dart frog, whose shockingly bright colours match its surprisingly fatal toxins. Usually in prey animals, blue tones are evolved to ward off predators. It isn’t a colour that’s often found in nature and therefore isn’t the most appetising to any potential diners.

The most famous blue reptile is perhaps the chameleon, which is able to become a wide variety of colours including, of course, blue. It is widely believed that chameleons change colour to camouflage themselves, but it’s actually to regulate their temperature and to communicate with other chameleons. It seems that there are many misconceptions regarding animals that change colour!