Found in Alaska, wood frogs freeze themselves in September in order to hibernate. If you tried to bend their limbs, they would snap.

This may sound like the behaviour of some kind of sci-fi creature, but it’s true! They are not COMPLETELY frozen solid, but for the most part they are stiff, cold and immobile. Scientists have even said that, because the frog’s cells have no way of communicating with one another during this period, the frog is technically dead! Adding to this, their hearts often stop during this frozen hibernation. 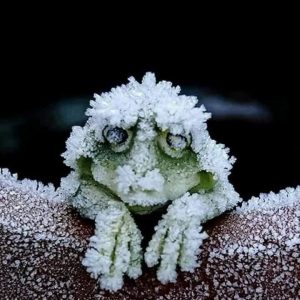 Why do they do this?

Because they are cold blooded, frogs taken on the temperature of their environments. So in Alaska, where temperature range from 6-13°C, the frogs freeze totally solid! The severely cold temperatures in some of their habitats is what pushes them into hibernation. It is simply too cold for them to function so they have no choice but to wait the colder seasons out.

Aquatic frogs will often do so at the bottom of lakes or ponds, either remaining motionless at the bottom or very gently swimming/floating around. Frogs that typically spend more time on land will find snug crevices and cracks to wedge themselves deep inside of to provide some level of protection from the cold and other factors such as predators. This keeps the frog nice and safe while they become little amphibious ice cubes to live through the cold.

Frogs can survive a shocking 70% of their body being frozen. However, if it gets TOO cold, the frog will sadly die. I guess not everyone can be as unbothered by the cold as Elsa.

Other animals that hibernate

A common misconception is that squirrels hibernate, but in fact they don’t really need to. Between the nuts and other food we see them quite aptly ‘squirrelling’ away and the fact they fatten themselves up during the same period, they have all they need to survive winter without slowing their metabolism. In case you aren’t a professor of biology or the author of a weekly animal blog, hibernation is defined as the slowing of an animals metabolism (bodily functions) for an extended period of time. They usually do this when food is scarce during the winter as it means they require less of it. Bears are another famous example of a hibernating animal, except unlike squirrels they actually do hibernate. Brown bears gorge themselves to form a lovely, thick layer of fat that keeps them alive when food is hard to come by during winter. Then, between October and December, they mostly sleep.

Not all hibernating animals sleep continuously or freeze themselves, some wake up rarely in order to meet their survival needs. These needs are lower as a result of the aforementioned lower metabolism. Of course, some animals don’t hibernate at all like dogs or cats. These animals don’t need to because they are capable of meeting their regular survival needs even during winter months.

So, do frogs freeze themselves? Yes, they do, in order to survive the winter, something many animals struggle with.