Sadly no, unlike their namesake, Komodo dragons do not breathe fire. However, they do have a plethora of OTHER fantastical qualities !

The more you learn about these reptilian behemoths, the more unbelievable they become. They’re gigantic, vicious AND agile : a perfect predatory triad.

I know at least for me, the more i looked into Komodo dragons the more i realised they don’t need to breathe fire to amaze (and frighten) me!

What CAN they do?

The dragons you hear about in fairytales are most known for being powerful mighty beasts with the ability to breathe fire and reek havoc. Outside of exhaling flames, Komodo dragons have got you covered.

Fully matured females weigh in at around 70kg, whereas the much larger males can send scales skyrocketing to somewhere between 80 and 90 kilos. For reference, that’s heavier than your average human which falls in the range of 60-80kg. Shocking stuff. But it doesn’t stop there. At 2.3m for females, 2.6m for males, they’re a hefty size. You’re probably imagining, and rightfully so, that they can’t move very fast as a result. That’s where you’re wrong.

Komodo dragons have a top land speed of 20kmph. Your average adult person reaches speeds of only 13kmph. Let’s give humans the benefit of the doubt and imagine that, in a life or death situation, we could all run as fast as Usain Bolt.

Mr. Bolt’s world record speed over 100m is a whopping 43.99kmph. But, realistically, he would not be able to retain this for enormous distances. No disrespect to the human bullet train, I’m just speaking the truth. Komodo’s on the other hand, are cold blooded monitor lizards and therefore able to slowdown their metabolism and increase their stamina. This increases their performance when hunting, swimming and, yes, running. 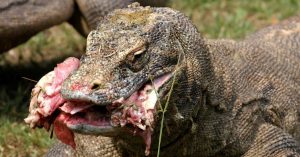 Last but certainly not least, a Komodo’s bite is deadly. Disregarding their 60, razor-sharp, inch-long teeth that can be easily replaced; they’re venomous. Originally the effects of this venom were thought to be that of the bacteria in the creatures mouth due to it’s diet of rotten flesh. It has since been found that they have venom glands that flood the enormous wounds inflicted by their teeth with fatal venom. Spooky.

Can ANY animals breathe fire?

Sadly no, not really.

An honourable mention must go to the bombardier beetle. These tiny critters can fire blasts of highly irritating chemicals that can blind large mammals and cause poor functionality in their respiratory system. Any areas hit by this blast on a human will become yellowish-brown and swollen. On top of the irritants, the blast reaches the temperature of boiling water. 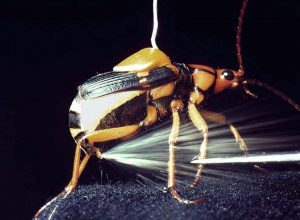 it’s not quite as tantalising as fire itself, but it’s pretty darn close.

Of course one of the first and only species to gain some semblance of control over fire is, well, humans! From heating your living room to creating the perfect ambience for a bubble bath, fire is an integral part of human existence. Even with the many technical advancements and mechanical marvels we’ve created, we still find ourselves drawn by flames.

Bonfires are a prime example: people love to stare at fire! It’s magnificent and beautiful and tantalisingly dangerous, which is what makes the idea of an animal breathing it so cool.

I know they don’t breathe fire, but Komodo dragons ARE pretty cool and you should look into them yourself. Check out this article from treehugger.com about cool features of the giant reptiles that i didn’t even begin to get in to (it inspired me to research them myself!)