Do magpies migrate? The answer is no as they are non migratory and rarely travel more than about 10km from where they hatched.

Unlike a lot of other birds like ducks, geese and bramblings, magpies do not in fact migrate. The question we must ask to figure out why magpies don’t migrate is why other birds do. What makes magpies special? In what way are they not like these other birds, and why is that the case?

Why do birds migrate?

The appropriate term for birds who do not migrate is ‘resident’ or ‘sedentary’.

Typically the main reason for migration is economical, in a sense; birds travel north to make use of the resource abundance and longer days during their mating season. They then travel back south when the days get shorter and colder to escape a freezing, wintery demise.

A prime UK example is swallows, which can be seen leaving for South Africa in autumn and don’t return until spring. I urge you to look out for them! 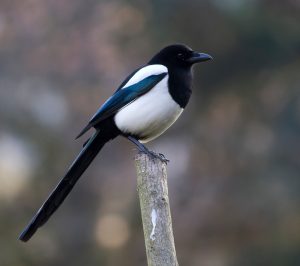 When raised by adoptive species, cuckoos who have never even met their parents are still able to effectively migrate in the winter; how is this possible?

It is thought that birds may use either the sun or stars in order to orient themselves and have a sense of direction. This ability to navigate, regardless of the true explanation at play, is simply extraordinary.

Another advantage of travelling at night aside from the stars is the ability to better hide from predators. The nighttime is also much cooler which means they are protected from dehydration and potential energy loss.

So why don’t magpies migrate?

After researching migration and it’s many benefits and motivations, it seems like a no brainer for all birds to migrate. So why don’t magpies, or a lot of other birds for that matter? What makes them special and capable of surviving the cold, harsh winter months ?

To answer that, we must think in terms of food rather than temperature. The primary reason for migration is food. Without a viable food source, most birds would be unable to survive the winter. This is why birds that eat mainly fruit and insects often migrate. Magpies, despite eating mostly insects in the summer, tend to eat mostly plant matter such as seeds in the winter which are WIDELY available. 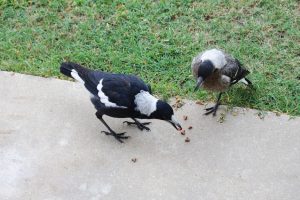 Magpies are well known for their tendency to scavenge for things, such as human food scraps. They do this so much that we often say that “to magpie” something is to copy or steal it, like an idea or your coworkers lunch.

So yes, while migration seems like the obvious survival choice for any and all birds, for some it isn’t. Magpies are resourceful and have plenty of viable food sources for any season, meaning there isn’t really any reason for them to migrate or travel far at all!