These tests involve human prosthetics controlled by monkeys with no missing limbs. This is because monkeys have similar brain structures to humans. Therefore, if a monkeys brain can control these prosthetics remotely, so could a humans.

How is this done?

In a feat of technology so brilliant it feels like it’s been pulled from Star Wars, the remote control of prosthetics is done via a neural implant. Remarkable, technology is.

All animals have a motor cortex. This is the area of the brain that controls movement. The scientists implanted a BMI (no, not THAT BMI) onto this area in our little simian friends. The apes used this brain-machine interface, as it’s otherwise known, to directly control the prosthetics as though they were their own limbs.

A direct example from the study shows that a monkey using a robotic arm was able to feed itself. You can watch the video of this (originally recorded during a study at Pittsburgh University) here:

One day I imagine we’ll be able to make a little group of cyborg monkeys to fight crime. On the other hand, i might be watching too much TV.

On a real note, this technology’s existence is amazing. Even more exciting, this study was originally carried out in 2008, so you can imagine how much further it’s come.

For example, a group of Swedish amputees have been living with this magnificent feat for years and have recently been updated with the ability to experience sensations of touch via the prosthetic hands. Absolutely brilliant! Read this study from Chalmers University of technology on Science Daily here to learn more. 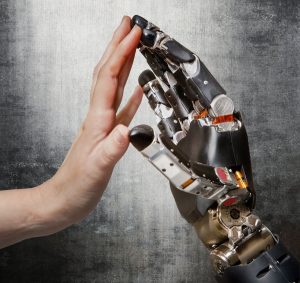 Do amputee apes use fake limbs?

From what i can tell, while rare, some monkeys in captivity are given prosthetic limbs. This is usually done for the aforementioned purpose of research into human prosthetics, rather than for the monkeys own benefit.

This is likely because robotic limbs that provide functional benefits are highly expensive and fake limbs that serve no purpose other than aesthetics aren’t useful for an ape. After all, a monkey probably won’t be self conscious about missing a limb.

Other animals (usually pets) do use prosthetic limbs. For example when dogs have non-working/missing back legs, a sort of doggy wheelchair is often provided for them.

Fake wings allow amputee birds to balance in the event they’ve lost one of their own. This lovely display of veterinary advancement reminds me a lot of How to Train your Dragon when Hiccup gives Toothless the wooden wing. Yet another example of medical technology seeming like it’s from a work of fiction. 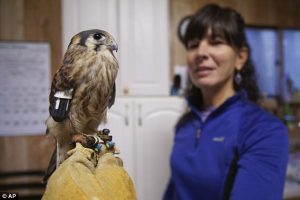 Overall, i think you can see how amazing prosthetic technology is for both humans and animals. It allows birds to balance, monkeys to feed themselves and disabled humans to lead ordinary lives.

I think it’s truly remarkable how quickly and effectively we as a species are able to advance like this. It’s even more heartwarming that there are those among us kind enough to use these advancements to help our animal friends.