Skinny pigs make great small pets, with their friendly personality and unusual look. They also have similar care to typical guinea pigs, so you’ll have a great time caring for them if you already have experience with small pets.

What are skinny pigs?

Skinny pigs are a breed of hairless guinea pigs. They are born with no hair at all, but sometimes grow wiry hair on their muzzles, legs or back as they grow into adulthood. 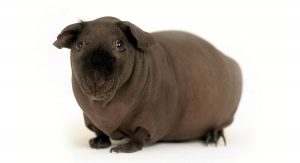 It is believed that skinny pigs came from a random mutation in the 1970s, which led to them being bred to be hairless by the 1980s. Other than being hairless, their temperament and needs are similar to any other guinea pig.

Similarly to typical guinea pigs, there are a few colours you can choose from, including brown, silver, and golden. 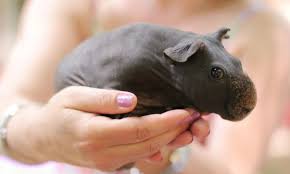 Because of this sociability, it is recommended to have more than one skinny pig giving them company and social stimulation. You can also keep them with regular guinea pigs. They are rarely confrontational or aggressive, so you won’t have to expect territorial altercations between the pigs. 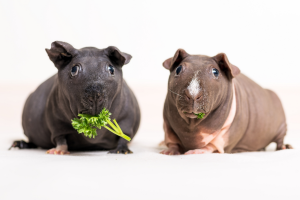 They’ll often chatter with excitement when in the company of others. They also sometimes ‘popcorn‘ like other guinea pigs, where they quickly jump around when they are happy.

With other pets, skinny pigs are usually completely fine. You’ll just need to make sure that any large animals that could prey on them are kept at a safe distance.

Skinny pigs are fairly easy to look after, with a similar setup to other small fluffy pets. For each skinny pig, you’ll need about 8 square feet of space in their tank. They like exploring different areas, so its great to get a tank with a few levels for them to climb between. They’ll also need a large play area or safety-proofed room, with plenty of toys to keep them occupied. 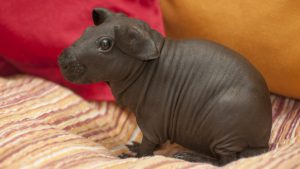 Since skinny pigs have little to no fur, you’ll need to make sure their tank is nice and warm, typically above 20°C. They should also have lots of substrate at the bottom of their cage, such as paper shavings. This allows them to dig down into the substrate if they’re feeling cold.

You should mostly feed your skinny pig hay, as it has great nutrition for them and keeps their teeth healthy. They also need a source of vitamin C which they can get from a huge choice of vegetables such as sweet peppers and tomatoes. 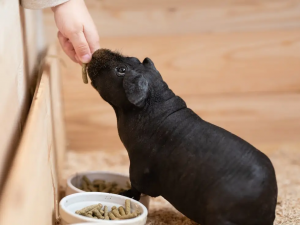 You can also give them fruit, but only as a special treat. Fruit contains lots of sugar so has the potential to cause health problems.

Skinny pigs are great pets. You should be aware that skinny pigs can have health problems related to their lack of hair, such as skin problems. They are also a little more expensive than typical guinea pigs and other small pets. 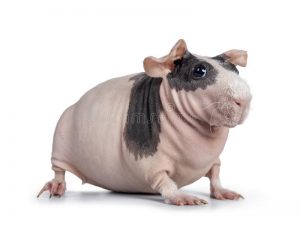 All in all, skinny pigs have the same great personality and ease of care as typical guinea pigs, but with their own unique twist. And remember, you can add them to a tank which houses other guinea pigs.