Snakes do not have eyelids, so cannot blink or close their eyes. Instead of eyelids, snakes have a small, clear scale covering each eye. Eye scales have a similar role to eyelids, protecting the eyes from injury and making sure the eyes don’t dry out.

Why don’t snakes have eyelids?

Snakes have eye scales rather than eyelids. Eye scales, which are typically known as spectacles or brilles, are essentially a snake’s specialised version of an eyelid. Snakes don’t have legs so their eyes are constantly in close contact with the ground, swept with leaves, grit and dust. This means they need a form of eye protection which prevents damage to the eye whilst the eye is open. If snakes only had eyelids, their eyes would have to be almost constantly closed to keep safe! 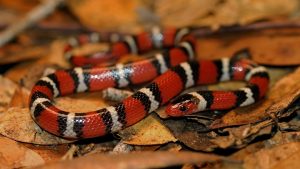 Snakes aren’t the only animals who don’t have eyelids. Geckos, as well as some lizards and skinks (a type of lizard), have these eye scales.

Brilles or spectacles are essentially a layer of transparent, non-moving skin which covers the eyes. They protect an animals’ delicate corneas from becoming scratched. Since fluids can’t escape this boundary, snakes do not cry. Instead, a fluid produced by the tear ducts stays as an extra protective layer between the cornea and brilles, preventing the eyes from drying out.

A snakes brilles are attached to the rest of their skin. This means that when a snake sheds its skin, a layer of its brilles is removed. Before shedding, as the skin begins to separate from the snake, its brilles become milky and opaque. This loss of clarity means a snake will have fairly poor eyesight for a few days before it sheds. 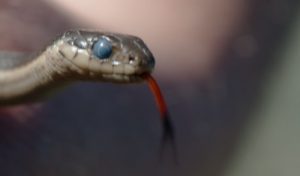 How do snakes sleep without eyelids?

Despite being unable to close their eyes, snakes can sleep just fine. Their brain regulates their sleeping mechanism, and they are able to sleep even with their eyes open. If you find this hard to believe, remember that humans do not actively ‘shut off’ our ears, for example, while we sleep. Even though we can still hear before falling asleep, we do not process sounds while we sleep as our brains actively shut any sound detection out.

Not having eyelids also means it can be difficult to tell whether they are asleep or not. Some of the time you may think a snake is silently staring, waiting to strike. If the snakes seems completely still, they are most likely asleep. 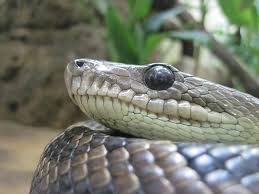 How do snakes eyes work?

You may wonder if a layer of skin over the eyes effects a snakes’ quality of vision. However, since the brilles are completely transparent most of the time, snakes can rely on sharp eyesight.

Snakes do not see in colour, but have two types of light receptors. One type, rods, allows them to see in very low light, but is quite blurry. The other, cones, allow them to see clearly. This allows snakes to see in their burrows underground, as well as clearly see their prey to accurately strike.

So, snakes don’t have eye lids but protect their eyes with unmoving transparent brilles, which give them perfectly clear and protected vision as the crawl across the ground.

Animal-Club provides animal parties or animal handling workshop where your will be able to see, learn and interact with the reptiles and other wonderful animals with the help of our presenters. Our mobile zoo has many interesting and friendly animals such as rabbits, tarantulas, geckos, vinegaroons and more that will be perfect for an animal party. We can also come over to your school for an animal school visit or arrange for an animal workshop with us where the children can learn about animal care and have fun too.