Do snakes die of old age? Snakes can live for a long time, around 30 years, before they die of old age. This is if they don’t die prematurely from infections, cancer, or other diseases. In the wild, snakes tend to die from being eaten by large predators or from other snakes competing for habitat or mates. 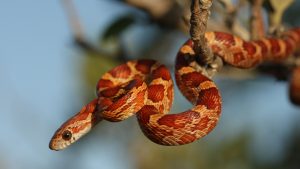 Do snakes have a natural death?

With proper care and attention, illness in snakes is rare or can be quickly treated, so most snakes in captivity die naturally around the age of their species’ natural lifespan. As they age, snakes begin to go grey in colour, become blind, and slow down their eating just like humans. In the wild, a natural death is much less common, due to factors such as predators, unstable habitats, or a lack of food.

How long do snakes live?

In captivity, snakes with a good environment and nutrition, as well as their natural genetics, typically live longer than others of the same species. Captive snakes live for a long time compared to wild snakes because they are kept in a safe environment, free from stress and threats they would face in the wild. By contrast to mammals, snakes and other reptiles continue growing until their death. This means that as a general rule, snakes which are able to grow to larger sizes live longer. This includes Ball Pythons and Wild King Snakes, which can live to over 30 years in captivity! 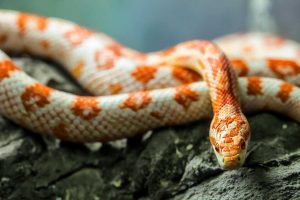 What is the oldest snake ever?

According to the Guinness Book of Records, the oldest snake in captivity ever was Ben the rainbow boa, who lived to 42 years old. In general, boa constrictors are one of the longest-living snake species in the world, living in captivity to typically around 30 years. Ball pythons are another long-living species, living to 20 – 30 years.

Why do snakes die in captivity?

Other than from reaching their natural lifespan, many snakes in captivity die from common illnesses such as mouth rot or from a parasite. A change in the condition of a snake’s body or scales may be an indicator of a health problem. Signs of a problem include bumpy skin or scales that appear inflamed. Poorly snakes may refuse to eat, although this can also be a sign of pregnancy or an attempt at hibernation. Improper care or unsuitable living conditions cause repetitive behaviours such as a snake rubbing its nose against the glass of its enclosure, which can cause infection. If a snake becomes over-stessed, it may die. 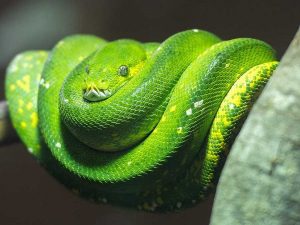 How do you know if a snake is dying?

Since snakes are quiet, slow moving animals that don’t outwardly show pain or signs of emotion, it can be hard to tell if a snake is close to death. Generally, a good way to judge how long a snake has left is simply to judge how old it may be. Some signs of old age in snakes include fatty lumps and cataracts, as well as stiffness of the body as their skin loses elasticity over time. One obvious sign of old age in snakes is a pattern change. The way the pattern changes varies between species however, either fading or becoming clearer over time.

Given proper care and attention your snake will have a long and happy life.

Animal-Club provides animal parties or animal handling workshop where your will be able to see, learn and interact with the reptiles and other wonderful animals with the help of our presenters. Our mobile zoo has many friendly animals such as rabbits, tarantulas, geckos, vinegaroons and more that will be perfect for an animal party. We can also come over to your school for an animal school visit or arrange for an animal workshop with us where the children can learn about animals and have fun too.