Vinegaroons make pretty great pets, since they are fairly easy to look after, and are much less dangerous than other exotic pets. Like most tropical creatures, they will need a hot, humid terrarium, and are fed insects, which are usually live.

What is a vinegaroon?

Vinegaroons, or whip scorpions, are pretty unique pets. Although they have flat, extended abdomens and spiky pincers like scorpions, they are actually more closely related to spiders. These pincers can make them quite alarming, but they are actually very calm, harmless animals. They don’t have a venom-filled stinger like most scorpions, or a venomous bite like some spiders. 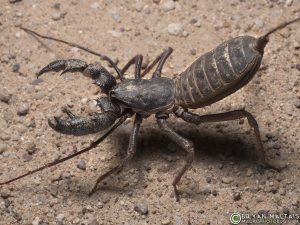 The ‘whip’ part of their name comes from their long, thin tail-like appendage. They are able to shoot a spray of concentrated acetic acid from the base of this tail. Acetic acid is found in vinegar, which gives the species the more common name ‘vinegaroon’. This spray is used as a defence, although vinegaroons are much more likely to run into their burrows or spread their pincers in warning if they become threatened. The acid is harmless to skin, but can sting if it gets into the eyes or nostrils. 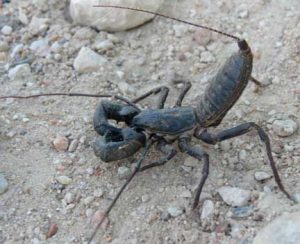 Why do vinegaroons make good pets?

Vinegaroons are docile creatures, making them safe even for children. Although they have large pincers and the ability to shoot acid from their tail, it is incredibly rare for them to use these on humans. They are mainly used to catch and crush prey before eating. This means you can handle them without fear of them attacking you. As long as you are careful to not pick them up by the tail or hold them too far from the ground, they won’t feel threatened by you. 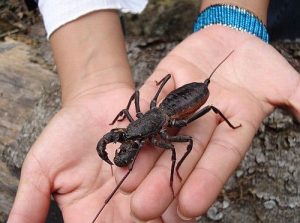 This makes the vinegaroon a great combination of terrifying looks but complete safety. Other large insects such as tarantulas can bite, and often are venomous.

It is best to keep only a single vinegaroon, as they are likely to attack one another if kept together. When one vinegaroon is moulting, it will be lethargic, and unable to move quickly. The other vinegaroon will see this as an opportunity to attack, and maybe even eat, the other. If you are looking to breed vinegaroons, you’ll have to separate them whenever one is moulting. 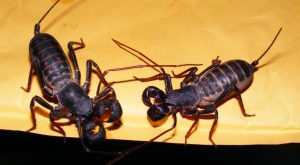 How to look after a vinegaroon

Looking after a vinegaroon is similar to looking after many exotic pets such as other large insects or reptiles. They need a cosy environment similar to their natural tropical climate, and are typically live fed insects. If you’re already familiar with this kind of set up, you’ll find looking after your vinegaroon easy.

Vinegaroons are native to many tropical regions around the world, including Africa and South America. This means they like arid and tropical climates. Their terrarium should be kept at 24-27 degrees Celsius, at around 80% humidity. You’ll need heating mats or panels, and could use reflectors and a specially insulated tank as well. You can keep humidity high by using shallow containers of water, and a humidifier. Substrate which is specially made for high humidities go a long way when maintaining good water circulation. 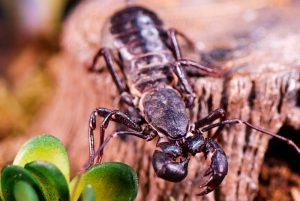 A vinegaroon’s terrarium should be filled with objects like pieces of bark and rocks, that can be used as hiding places.

Vinegaroons are exclusively carnivorous. Most species prefer crickets or cockroaches since they are larger, but they’ll also eat mealworms and millipedes. It’s always better to give them live prey, so they can hunt like they would in their natural habitat. 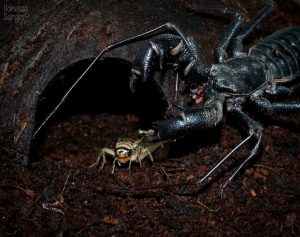 You can meet a vinegaroon in person if you take part in one of our animal parties or animal handling workshops where your will be able to see, learn and interact with many wonderful animals with the help of our presenters. Our mobile  zoo has many friendly animals such as rabbits, tarantulas, geckos, vinegaroons and more that will be perfect for an animal party. We can also come over to your school for an animal school visit or arrange for an animal workshop with us where the children can learn about animals and have fun too.