Axolotls regenerate lost limbs via rapid cell division. The cells of the limb divide and multiply rapidly until a new limb has been formed.

This is similar to how we all grow and, to a much lesser extent, heal. When we’re growing up our cells are rapidly dividing so that we can, well, grow. When we cut ourselves, the bleeding is stopped and then our bodies get to work repairing the injury by replacing any dead or damaged cells.

Despite this, we can’t regenerate entire limbs. Shocking, i know. Axolotls are quite unique in this way, not many creatures can form new limbs at all, never mind at the same speed as these little amphibians As I’m sure you’re all wondering at this point, what makes them so special?

I know i said before that both ourselves and axolotls ‘regenerate’ via rapid cell division but that isn’t the full story. When we’re injured, we form new skin cells that cover up the injury in order for it to heal.

However, when an axolotl regenerates, it is able to transform nearby cells into ‘stem cells’. For those of you who aren’t biologists, put simply a stem cell is a basic cell that can ‘become’ any other cell. These lovely little structures are how we grow from a tiny baby to giant adults.

In humans, they eventually become limited in their usage which is why we can’t live forever or grow our hands back. Axolotls on the other hand are able to recreate any missing or damaged structures perfectly. This includes bones, muscle, skin and more. The stem cells replace the original cells in the same position, allowing for total regeneration.

How far does this ability go?

So far, we’ve discussed how axolotls are able to regrow limbs, but it doesn’t stop there. These remarkable creatures can also regenerate the front half of their brain, known as the telencephalon.

Brains are immensely complex and being able to regrow one in a matter of weeks is unbelievable, but that’s not all. Biologists have said that you can crush their little spinal cords and in about three weeks, the legs and tail will be fully functional once more. It takes a feeble three weeks for them to entirely repair all the mechanisms of the spine.

An adult axolotl typically measures around 30cm in length and can weigh up to 10.5 ounces. So, taking this in to account, if an axolotl was human sized it would probably take significantly longer for it to regrow its spinal cord, arm or brain. 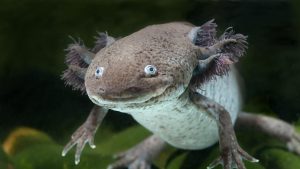 However this small setback doesn’t stop the axolotl from being one of the most interesting and frankly coolest species on the planet.

Research into axolotl regeneration is done with the hopes of unlocking this ability for ourselves. Think of the healthcare possibilities and advancements in modern medicine that would come from such a small creature.

Axolotls are critically endangered; there are only 1000 or fewer left in the wild. This means at any moment we could loose all of that wonder and potential.

Axolotls are a perfect example of a little going a long way, and they show how fascinating the animal kingdom is. Personally, i think they should be the mascot for animal preservation.