What is a rabbit?

Most people probably see their first rabbit as a child. Either in a film such as “Bambi” or “Zootopia”, like cartoon characters or just wild rabbits hopping around the neighbourhood.

A rabbit is a type of mammal, ranging in size from 2.5 pounds to 16 or more pounds for giant breeds. Their fur can be a typical shorthair, woolly, rex, satin, or a mix.

Rabbit’s ears are upright, except for lop breeds whose ears hang down. Some bunny breeds have highly long ears, such as the English Lop, while others have small, upright ears like the Netherland Dwarf.

They have two sharp front teeth. Meaning they can slice like scissors through the rough, fibrous vegetation they eat. Their cheek teeth help them chew their food into smaller pieces that are easier to swallow. This combination of teeth comes in handy in the wild.

Rabbits come in a range of colours. From brown, white or black. Some breeds of rabbits have up to 20 different colours in them. Rabbits are beautiful as they have different patterns. As well as varied eye colours – including brown, blue, ruby and blue-grey iris colours. 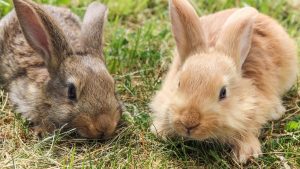 The history of a rabbit.

The 305 global rabbit breeds have all descended from the European rabbit. Recent research has shown that all European rabbits carry common genetic markers and drop from two maternal lines. These lines originated many millions of years ago when glaciers isolated two populations.

We can assume that the early human species began hunting rabbits as a food source, but little comprehensive evidence of the relationship with humans exists until Roman times.

Historians think that rabbits were first tamed in 600 A.D. by French monks.

In any event, rabbits were introduced from Spain and France to many countries, including Britain. The historical evidence credits the Romans with the earliest written records of rabbits and the first to use cabinets and walled enclosures. By the middle ages, rabbits were regularly transported across Europe.

It took more than 2000 years for differences to be noted between the bones of wild or captive/ domesticated rabbits. 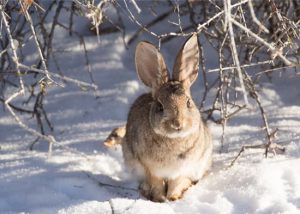 Blue cross, pets4home and many other charities offer you to adopt rabbits that need a new home.
Blue Cross says: “We help find the perfect pet for you by matching the pet to suit you and your family’s lifestyle, ensuring that whatever animal you adopt it is the right one for you.”

On the other hand, websites such as gumtree allow people to post private listings of their rabbits. However, make sure you look carefully as sometimes the owners are not looking out for what is best for the rabbit.

If you are looking for something with more guarantee. Pets at home sell rabbits. They can also provide you with more information. You can also pick up everything you need for your rabbit (cage, bedding, food) when you are there.

Rabbits have not had an easy life. They have been used and abused for their silky, soft fur. For years there have been cases of illegal fur farming. When buying your rabbit, we recommend you go for adoption or do heavy research ensuring the rabbit is happy. 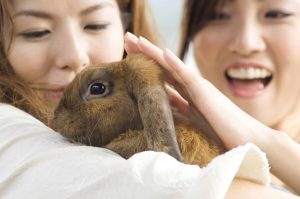 Is a rabbit a good pet?

Rabbits are one of the most common pets, and this is for a reason. After you built up your relationship with your pet, you will realise how friendly and cuddly they are.

However, having a rabbit is a long-term commitment. So be prepared to have it in your life for a while.

Though rabbit has many good qualities, you have to remember they will take up a lot of your time. They need entertainment all the time. If not, they will become bored and get into trouble. They’ll make their fun chewing your possessions if you don’t provide alternate forms of entertainment.

Another positive about rabbits is they make close to no sounds. They don’t stay up late at night barking, and they don’t meow at you to demand attention. I would even argue that sometimes a rabbit is quieter than a mouse because mice squeak and rabbits don’t.

Owning a pet rabbit comes with added financial responsibility. Be prepared to spend money buying the rabbit itself. As well as housing/food/rabbit proofing supplies. In addition, be sure you’ll be able to afford ongoing costs for a rabbit on food, litter, and vet bills. 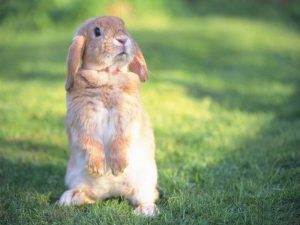 A rabbit housing refers to proper cages or hutches and arrangement for feeding, watering, and caring for rabbits. Rabbit houses are essential to keep the rabbit on one roof and to prevent them from running away.

Every rabbit is different; however, from experience, it generally takes around six months for a bunny to feel settled and happy in its new home finally.

You can raise domestic rabbits outdoors or indoors. Housing for rabbits ranges from outdoor hutches to indoor cages to the free run of the home.

Ensure the rabbit hutch has two connecting areas – one area with a wire mesh door to allow light and air through. The other area should provide weather protection against the sun, cold, wind and rain.

The base of the cabinet should have newspaper and then hay. This flooring creates warmth for the rabbit. The hutch or cage must also have a place for food and plenty of water.

One main thing to remember about rabbits is that they should never be confined entirely to a cage. Remember, they are designed to run, jump and move around. 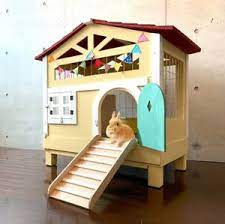 Diet of a rabbit

Rabbits are grazing animals; this means they should have an unlimited supply of fresh hay. Rabbits make up 80 to 90 per cent of rabbit’s diet.

You’ll want to feed your rabbit grass hays. Suitable types of grass hay for bunnies are timothy, orchard grass, brome and oat hay. Buy the freshest hay possible and check for the presence of mould or dust, which could make your rabbit sick.

Most greens found in a supermarket are safe for rabbits. However, you should not give your rabbits more than two cups of fresh vegetables daily. Dwarf breeds and rabbits under five pounds should get just one cup of fresh veggies per day.

A variety of two or three vegetables is ideal. Add one new vegetable at a time, and watch for signs of loose stool or diarrhoea because, as mentioned above, bunnies have delicate digestive systems.

DO NOT feed your rabbit potatoes, corn, beans, seeds or nuts. These foods are difﬁcult for rabbits to digest and can cause serious digestive problems. 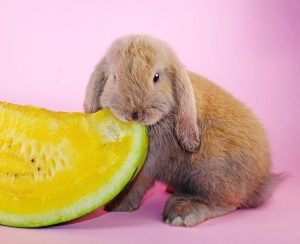 Rabbits are good pets. However, it would help if you remembered they are very close to wild rabbits. Being close to a wild rabbit means they will hide signs of illness until they are very unwell, as this would make them “easy prey” in nature.

The more common problems/ diseases that we see in domesticated rabbits are: 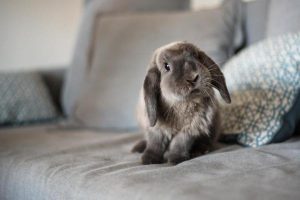 How often you groom a rabbit depends on its coat. Short-haired rabbits should be brushed at least twice a week, while those with long hair need brushing every day. You may need to brush your rabbit more frequently if they are shedding.

Use a soft brush made for cats or rabbits. Since rabbits have sensitive skin, some hate being brushed, primarily if you use a stiff brush. It can take some trial and error to find the type of brush that makes your rabbit most comfortable, but soft cat brushes tend to work well. 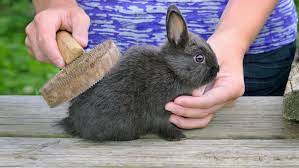 Pet rabbits averagely live up to 8 years old. Some rabbits can also live up to 12 years. However, wild rabbits face constant stress from predators meaning they will not live as long as domestic rabbits. In contrast, domestic rabbits have regular food and safe places to hide. 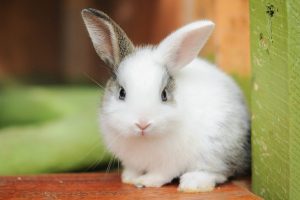 Rabbits love to dig! In the wild, they live in burrows, which they dig themselves, but our pet rabbits also have the same need to search. So if you’d instead your rabbits didn’t start digging up your lawn or you’d like to give them something fun to do, you can give them a shallow planter filled with soil to dig around in.

A big part of a rabbit’s day would usually be foraging for food. As we’re the ones who provide their food, you might think there’s not much for them to feed for. However, you can make forage trays for your rabbits to keep them occupied at home. Hide their food in amongst scrunched up newspaper or grass (you can pull grass from the ground yourself, but don’t use lawnmower clippings as these can upset your rabbit’s stomach!). You might also want to try to scatter feeding instead of using a bowl – spread their average food around a clean area of cabinet or in a cardboard box filled with hay.

Rabbits love to explore! While they’re in our gardens, they can’t explore new places, so make sure you give them lots of rabbit-safe toys they can have a look at. You can also cut holes in a cardboard box to run through and explore or get them a rabbit-safe tunnel. Check out our homemade rabbit toy ideas.

Along with running and digging, rabbits like to jump! So give them different levels in their run by putting in boxes or upturned containers for them to climb and jump on.

Rabbits love to gnaw on things, and it helps them keep their teeth a reasonable length (as their teeth are constantly growing!). Try giving them small branches (or buy them from a pet shop) to gnaw on – safe trees include apple, maple, birch and willow. 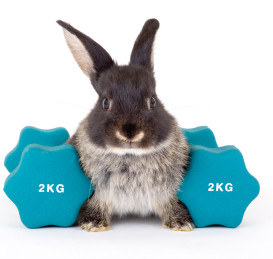 Though this is a rare breed, it is most recommended for first-time owners. The American Rabbit has a calm, sweet nature. Young children, however, are not recommended to care for them since they are shy and may bite if not handled gently. If you treat your rabbit well (with good grooming and a healthy diet), the American rabbit can live up to 12 years.

Known for being a more outdoor rabbit, they are one of the oldest breeds. The Belgian Hare Rabbit thrives best outdoors with ample space and hay. It’s considered high maintenance, primarily due to its nervous personality— known to easily spook if people don’t correctly announce themselves before approaching it.

The Blanc de Hotot is distinguished by its “black eyeliner” that contrasts the rest of its white body. If you are looking for a child/another pet-friendly rabbit, this may be the one for you. Dedicated brushing time and taking walks outside are excellent ways to bond with them.

A cross between a Himalayan and a Chinchilla, the Cal’s dense coat allows them to enjoy time indoors and outdoors (including the snow). Although bred for show, the Californian loves to interact with its human family through play and cuddle time.

Weighing in at about 13 pounds, a Checkered Giant is an ideal pet for couples or seniors looking for a companion. This breed is more independent than others and is less affectionate but is still curious and gentle. Spot a Checkered Giant by the butterfly-like marking on its nose. 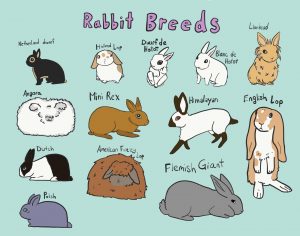 Rabbits have an average litter of rabbits is seven but can go up to 15. You can notice if your rabbit is pregnant after about 10-15 days post-breeding. You should be able to feel multiple marble-sized bumps inside the rabbit’s belly. These small bumps are the baby bunnies and will be just big enough to think at this time gently.

A pregnant rabbit will exhibit nesting behaviour about a week before giving birth. The most obvious sign that a rabbit is beginning to nest is if she’s piling up bedding or digging into a corner of the enclosure. Most rabbits give birth at night, so be prepared to wake up to a litter of rabbits. 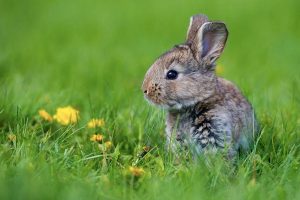 If you are thinking about breeding your rabbit, please first remember that you can find lots of rabbits that have been abandoned and need new homes.
Aside from keeping an intact female rabbit utterly separate from an entire male rabbit at all times, the best way to prevent a rabbit from becoming pregnant is to spay it.