What is a tarantula?

Find tarantulas in the southwestern states of America. Tarantulas are not insects. They are part of the arachnids. Arachnids are spiders and ticks, and other insects like invertebrates that have eight legs, not six. While many tarantulas are dull brown or black, some species are brilliantly coloured or striped. Tarantulas most distinctive physical characteristic are their hairy legs and bodies.

Despite the rumours and their fearsome appearance, tarantulas are not threatening to humans. According to National Geographic, Tarantula’s venom is milder than a honeybee, and though painful, their bites are not harmful. Tarantulas have become a popular pet for arachnophiles around the world.

According to the National Wildlife Federation, female tarantulas can live up to 30 years, while males live for a much shorter time, around seven years.

Currently, scientists have identified 1,000 species of tarantulas. Some more popular breeds can be found as common house pets (maybe you are even thinking of getting one!)

Tarantulas’ size and colouring can vary wildly depending on location and species. From front right leg to rear left leg, tarantulas range from 4.5 to 11 inches (11.4 to 28 centimetres) in length. They weigh from 1 to 3 ounces (28.3 to 85 grams) and have strong jaws and fangs.

Fun Fact: The fangs’ position is distinctive as they are parallel to each other and face downwards like a vampire’s. 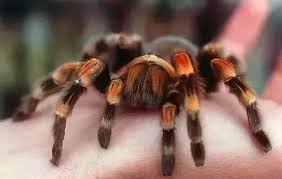 History of the tarantula

The name for the origional tarantula was “Lycosa tarantula”. This breed of tarantula is a species of wolf spider native to Mediterranean Europe. The name of “tarantula” came from the Southern Italian town of Taranto.

Initially, people used the term “tarantula” for any large, unfamiliar species resembling a spider. After understanding more about the species, scientists could differ between a tarantula and a wolf spider. The main difference between the two is wolf spiders are not particularly large or hairy compared to tarantulas.

Scientists believe that tarantulas first came along around 380 million years ago during the Devonian Period, more than 150 million years before the dinosaurs. 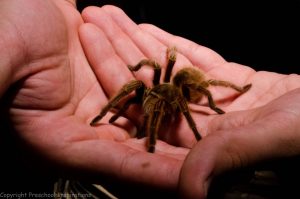 Blue cross, pets4home and many other charities offer you to adopt tarantulas that need a new home.

Blue Cross says: “We help find the perfect pet for you by matching the pet to suit you and your family’s lifestyle, ensuring that whatever animal you adopt it is the right one for you.”

On the other hand, websites such as gumtree allow people to post private listings of their tarantulas. However, make sure you look carefully as sometimes the owners’ are not looking out for what is best for the tarantula.

If you are looking for something with more guarantee. Pets at home sell tarantulas. They can also provide you with more information. You can also pick up everything you need for your tarantula (cage, bedding, food) when you are there.

Some spiders, such as the foreleg, were more than $40,000 worth of spiders, insects, and other crawlies stolen from the Philadelphia Insectarium and Butterfly Pavilion. In late August of 2018, people stole tarantulas in a suspected attempt to sell them into the pet trade.

Furthermore, a man in Singapore was fined $12,800 for illegally keeping 92 tarantulas in his home and trying to smuggle six more—stuffed in plastic containers in his car’s back seat—into Singapore from Malaysia, according to local media.

When buying a tarantula, make sure the owner has the correct documents, and you have done sufficient research before buying. 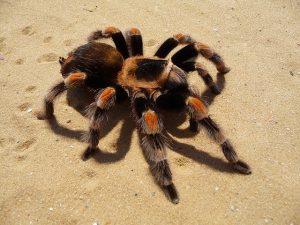 Is a tarantula a good pet?

While spiders are known to be one of the creepiest and weirdest animal species, tarantulas can become an excellent pet option. These spiders require a small place to keep and are extremely fun to observe. However, they are not quite suitable for handling and may cause itching, allergy and other similar health problems if they are not correctly handled.

Having a pet tarantula spider can be more like having a collection. Tarantulas are more to be observed than being handled.

Positive about a pet tarantula

Tarantula spiders are very quiet and isolated creatures and usually grow in size to about 5 to 8 inches. Due to this, they are straightforward to house and require only a small area to keep.

Pet tarantulas are very easy to maintain and require a cost of maintenance. They are also straightforward to feed as adult tarantulas need food only about once a week. Apart from this, some species also fast for a very long time, maybe about a month or two.
While tarantulas are not well recommended for handling, they are excellent for observation. There is a massive variety of tarantula spiders available in the market, with each species being unique in its way. Some are quick, agile, and create many webs around their habitat, while others are slow and may have burrowing needs and tend to be very delicate.
When all this is considered, it becomes fascinating to observe a pet tarantula naturally going through another day of its life.

Negative about a pet tarantula

Not Well Suitable for Handling
Tarantulas can be good pets, but they are not recommended for handling. This is mainly because they can bite and have irritating abdominal hairs. Tarantula bites are mostly non-fatal but can cause itching, swelling, or irritation. However, do remember the fact that there are a few tarantula species that have fatal bites.

On the other hand, they have abdominal hairs thin enough to get into the skin and cause irritation. Moreover, if these hairs get into human eyes, they can cause swelling and other eye-related severe problems. Therefore, it is recommended that you do not rub your eyes after handling a tarantula and carefully wash your hands after every time you touch it.

Need Delicate Care. Tarantulas may look very intimidating, but they are very delicate creatures. If the enclosure is kept very high up, then there is a chance of them falling from the height, which may cause critical or fatal injuries – this is the biggest threat to their lives.

Another thing that might require extra attention is the humidity levels. If the humidity levels are not high enough for your tarantula species, they may suffer from dehydration, making them very lethargic and otherwise unwell. Apart from this, their feeding habits may also need extra attention, especially during their growth and moulting periods. Not feeding enough during their growth can cause them various health problems and hinder their natural growth process. On the other hand, providing them more than necessary during their moulting period can result in death.

Not Socially Accepted. While keeping tarantula spiders as a pet might be exciting for some people, there are a large number of people who are extremely scared and creeped out just by looking at a spider. Because of this reason, they are not suitable for social environments. 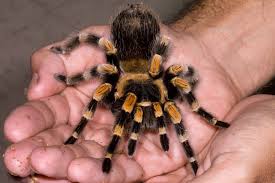 Tarantulas are animals that are left best on there own, so house one tarantula per cage. Making sure the cage is securely closed as tarantulas are the nest escape artists.

The general rule is the enclosure should approximately be three times the spider’s leg span. We would generally recommend a five-gallon aquarium. Any bigger wouldn’t make a difference and makes it more difficult for the tarantula to find its prey.

Include branches on which the spider can climb and construct its web. Line the enclosure’s bottom with a layer of vermiculite or vermiculite mixed with potting soil and peat that’s at least 2 to 4 inches deep to allow for burrowing. Your tarantula also needs a place to hide. A piece of cork bark, a half hollow log (often available from pet stores), or half a clay flowerpot on its side are all excellent options.

Tarantulas generally don’t need heat lamps, as most species do fine at room temperature. Some species require high humidity levels, which you can achieve by misting the enclosure daily. Tarantulas don’t need bright lights and should be kept out of direct sunlight.

Ensure that you have fed the tarantula to clean away any uneaten food at the end of the day. You will only need to give the cage a full deep clean once every six months. 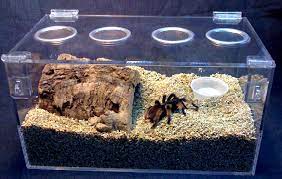 Tarantulas eat mealworms, super worms, roaches. However, more giant tarantulas will eat pinkie mice and small lizards. Feed your lizard crickets that have been gut loaded (fed nutritious food), in order for the tarantula to be healthy. In general, the size of the food should be smaller than the tarantula’s body.

Adult tarantulas need feeding around one time a week; on the other hand, younger tarantulas. It is best to provide your tarantula when your spider is a lot more active at the end of the day. Consult your veterinarian for the appropriate quantity and variety to feed your spider, as this can vary based on age, size, and species.

You should provide a small dish of freshwater at all times. It must be very shallow to prevent drowning. You can place some pebbles on the plate to give the spider something to climb out on as a precaution. 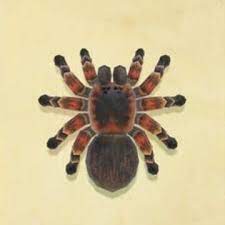 The Mexican red-knee is often the first pet for spider enthusiasts. You can recognise this breed of tarantula by its red-orange knees; black body with brown hairs. The Mexican red-knee tarantula is around 5 inches in length.
The females can live around 20 to 30 years while the males only live for about ten years. A 5- to 10-gallon tank is suitable for these tarantulas. 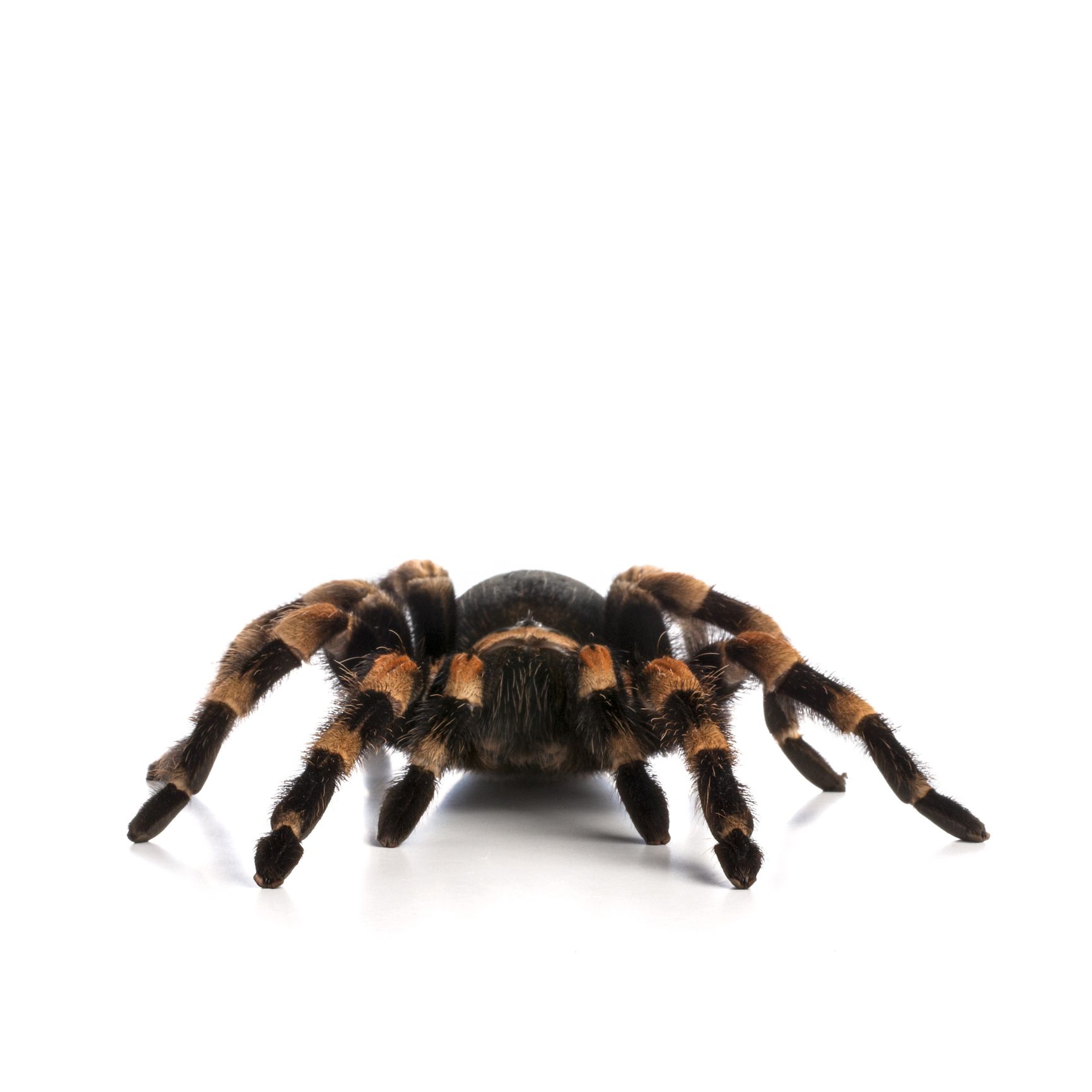 The Chilean fire tarantula is a famous spider for beginner arachnid enthusiasts. It is primarily black to brown; rose-coloured hair on the upper body. This breed of spider was around 4 to 5 inches.
The females can live up to 20 years while the males only live around five years. A typical burrowing spider, the Chilean rose requires a warm, humid environment and is relatively calm. 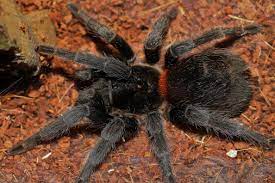 Costa Rican zebras are calm, ground-dwelling tarantulas that can move very fast. If you are looking for a pet spider to handle, the Costa Rican Zebra is probably not the one for you. The females can live up to 20 years, with the males at around five years. A warm, humid, 5- to 10-gallon tank works for this spider.
You can identify this breed of spider through the lack of body; deep red hairs; white stripes on legs; orange spinnerets. 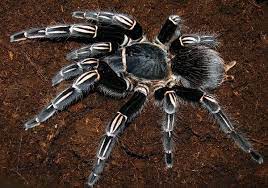 The Mexican redleg has a dark body; pink, red, or orange on the second joint of legs; a light upper shell with a black triangle at the front.

Females can live up to 30 years, while males live around five years. These ground-dwelling spiders are typically docile but are easily startled. The recommended temperature range for this species is 75 to 85 degrees. 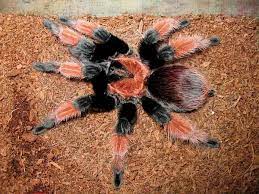 Put you’re the chosen ale into the females enclosure (do not do the other way around as she will most likely kill and eat the male!)

Introduce a male of the same species into the female’s habitat.  Then, leave them undisturbed to allow the male to settle down and start its courtship process.

Breeding can take anywhere from a few minutes to a few hours, so keep a close eye on the 2 tarantulas to make sure the female doesn’t try to kill the male. An indication that they have stopped breeding is male will try to run away. You need to catch and remove him before the female is able to catch him and kill him.

If the female gets a hold of the male before you can remove him, use a stick or a small paintbrush to separate them. Don’t use your fingers or you could get bitten!