Ferrets are highly social animals, that need to play and explore. Keeping more than one ferret allows them to play together throughout the day. You can keep ferrets on their own, but you’ll need plenty of time to play with them to keep them happy.

Ferrets make great pets: they’re incredibly cute, tremendously social and playful, and have similar needs to a typical house pet such as a cat or rabbit.

Ferrets are crepuscular mammals, meaning they are most active in the early morning and evening. Paired with the fact that they sleep for around 16 hours a day, this makes them great pets if you are typically away from home whilst working. 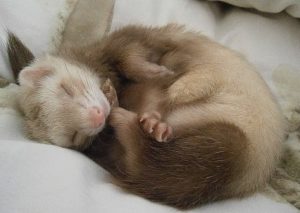 Even so, they need the chance to exercise and explore. They can be left in their cage while you are away, but need to be let out for a minimum of two hours, preferably in both the morning and evening. Since they are intelligent, curious creatures, they need the daily enjoyment of exploration. This could be around the home, or outside in a ferret-proofed zone. 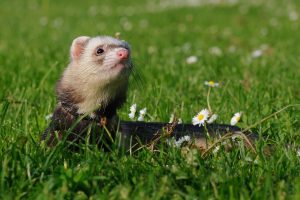 Ferrets are very sociable and playful animals. Ideally, you should keep them in a pair or small group.

A pair could be same-sex, as they are unlikely to fight due to competition when the other sex is not present. You could also have a male and female, but you would have to neuter them if you want to avoid breeding them. 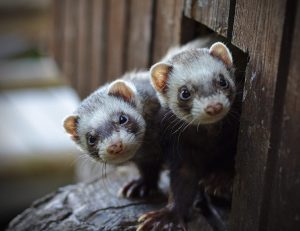 Bear in mind that keeping ferrets in a pair has the inevitable risk of one of the pair dying, leaving the other ferret lonely and upset. If and when this happens, you would need to give them extra attention to make up for the company they have lost.

You can also introduce a new ferret to the one you already own, although it is a more tedious process than introducing them as a pair from the start. They would need to be kept separated from one another for around two weeks, and be given separate times to explore the space.

You could then introduce them without contact, for example by putting their cages side by side, before allowing the ferrets to play together. 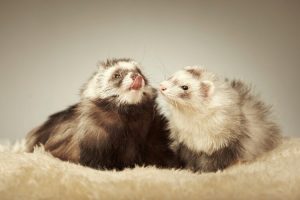 This process can take months, so it is always best to buy a pair from the start.

Unfortunately, there is always the risk that ferrets kept together simply do not get along. They may fight often, or always keep a fearful distance from each other. This would mean they would have to always be kept in separate cages, and let out to play at different times of the day.

Playing together with ferrets

Especially if you choose to only keep one ferret, they’ll need to spend plenty of time with you.

Ferrets love to play with humans. You’ll need a lot of space to run and jump around in, so clear a large area in a room or long hallway. Your ferret may love to chase you. You’ll need a toy they’re familiar with or one with a treat inside to encourage them to chase after you. As long as your ferret doesn’t have a nervous personality, you can also chase after them! 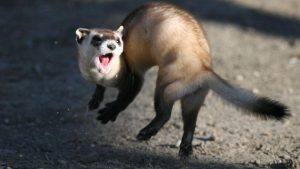 There are also plenty of toys made for ferrets that you can use. This could be a toy for a gentle game of tug of war, or a toy on a string similar to toys made for cats. You can also throw toys for a game of fetch, or hide them for your ferret to find. 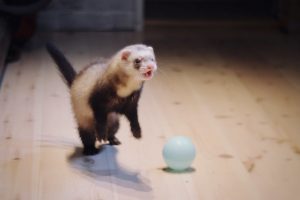 All in all, ferrets are amazing animals that you will make a great bond with. Whether you keep them in a pair or just on your own, you just need to make sure they have plenty of entertainment to keep them happy.