The Pacman frog comes from South America. Spending most of their time in a humid environment among damp leaf litter (perfect for camouflaging themselves in). They live between 7 – 10 years. Pacman frogs are famous for their cartoon features but however cute they look any prey that walks by is a fair game for this hungry frog. 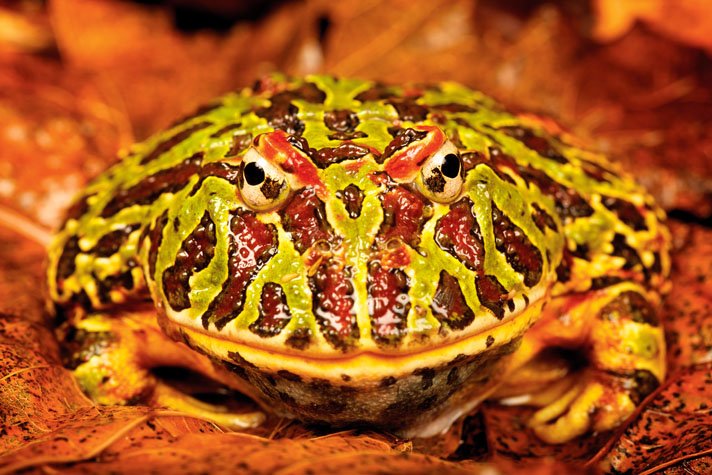 How did they get the name Pacman?

The South American Horned frog got its name due is characteristically round, large shape mouth. Which looks a lot like the video game character Pac-Man.

Pacman frogs are earthy coloured so that they can blend in with their surroundings. They have a round, large shaped mouth as well as a round body. The Pacman Frog’s eyes are beady and situated on top of their head. The most surprising thing about these cartoon looking frogs are their teeth – the frog only has teeth only on the upper jaw. When the frog is fully grown they get strong enough to take the skin off a human’s finger.

The Pacman frog is from the animal class – Amphibian (Amphibians are ectothermic, tetrapod vertebrates of the class Amphibia)

Where do they come from?

What do Pacman frogs eat?

Pacman frogs eat crickets, roaches, fish, worms and even small mice. The amount of food you feed them is based on the size and temperature of the frog.

Is a Pacman frog a good pet?

Pacman frogs have lots of good qualities such as they don’t need a very large cage since they are not very active, they are also easy to feed since they are not fussy eaters. If you are looking to get a Pacman frog as a pet you should look for a clear-eyed, blemish-free frog, this is because Pacman frogs very easily become ill. The best way to know if you pick a healthy frog is by watching it eat – very rarely will a Pacman frog refuse its food.

However, watch out these frogs have been known to bite if they feel threatened and are also not good for handling.

How do you tell the difference between a male and a female? 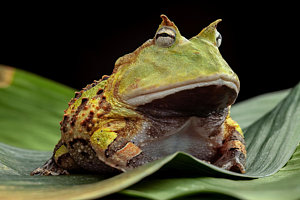 How do you look after a Pacman frog?

Questions (skim read through the text above to answer the questions)