Each giraffe has their own unique set of spots, but it is thought that they in part inherit them from their parents. This explains why each subspecies of giraffe has its own general spot shape and colour. Their spots mainly function to camouflage them from predators, although they also help to regulate their temperature, and could be used to attract mates.

Why do giraffes have spots?

Since giraffes are the tallest land animal in the world, it may be hard to believe they have predators in the wild hunting them. In fact, they have lions, leopards and hyenas to worry about. If spotted, a giraffe can attract a whole group of predators, which will slowly attack them until they fall. They are somewhat able to defend themselves by kicking their attackers, but their young are extremely vulnerable. For this reason, staying hidden is of upmost importance. 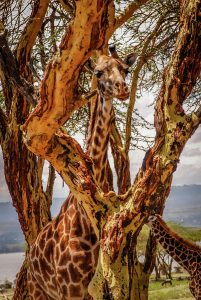 Did you notice there are two giraffes in this image?

The distinctive spots of a giraffe make them easy to find at a zoo, but they actually help to camouflage them in the wild. When giraffes stand between the savannah trees or in the grasslands, their spots allow them to blend in with the patchy bark and dappled light. As they walk, their moving spots simply look like swaying branches. This makes them harder to spot by a predator.

This isn’t the only reason though: the spots also help giraffes to regulate their temperature. When looking at giraffes from a thermal camera, their spots appear darker than the rest of their body. This means their skin is hotter under their spots, but why? 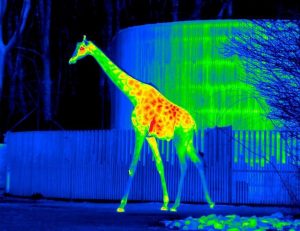 Under a thermal camera, spots are bright red!

It is thought that giraffes have a system of blood vessels behind each patch. These vessels draw blood closer to the skin, allowing the heat from their blood to escape into the atmosphere. This loss of heat allows the giraffe to cool down in the heat of the savannah

Their spots could also allow them to attract mates, or to recognise members of their species.

How giraffe spots vary between subspecies

There is some disagreement over the number of subspecies of giraffe, but there is generally thought to be nine: Reticulated, Kordofan, Nubian, Angolan, Cape, Ugandan, Nigerian, Thornicroft’s and Masai. Each of these subspecies has its own unique pattern style. They are all easily recognisable as giraffe spots, but have a subtly distinct shape and colour. 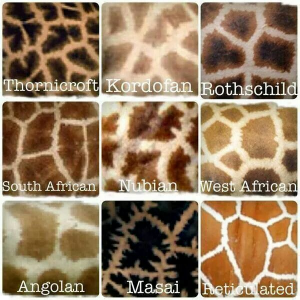 For example, Masai giraffe spots are the darkest, and have wavy edges. Reticulated giraffe spots typically have sides that are perfectly straight.

Does every giraffe have a different pattern of spots?

Just like fingerprints, the spots of a giraffe are entirely unique. But it is believed that spots could be in part inherited from a giraffes parents. 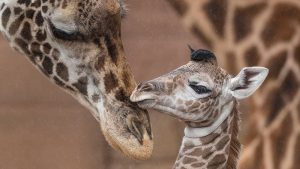 Between 2012 and 2016, a Pennsylvania State University research team investigated giraffe spots in northern Tanzania. Analysing 31 mother and calf pairs, they found significantly more visual similarities in the spots of giraffes that were related. 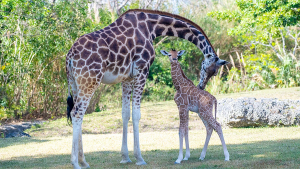 The team also looked at how the survival rates of young calves correlated with their spots. They found that those with more irregular spot patterns were more likely to survive to adulthood. With this, it makes sense for spot patterns to be inherited. If a calf’s mother managed to survive to adulthood and have children, it’s beneficial for them to inherit their super-survival spots. It also explains the spot distinctions between subspecies.