In order to successfully mate, they often put on strong displays in which the bird shows off to it’s potential partner.

This can be achieved in a wide variety of ways that trigger a wide variety of senses. I want to break down the why and how of these rituals and find out which bird flaunts its stuff the most. Let’s get into it!

How do we define ‘showing off’

A good question. To be very technical, Merrimack-Webster defines the act of showing off as ‘to display proudly’. So we’re looking for birds that proudly display either part of themselves or something they’ve built. Easy enough!

First and foremost, let’s talk about the most obvious. Usually in any species of bird, the males will be pompous and brightly coloured in an attempt to outshine each other.  This is not to say females aren’t, but usually we see either both being colourful or only the males. When the males ARE more bright and vibrant, that is known as ‘plumage dimorphism’. The reason for this is that the male birds usually have to impress the females in order to win their favour, this means having the most impressive plumage and standing out from a crowd of other potential mates.

Another way they attempt to do this is by building beautiful nests. In general, this is done mostly by the female AFTER mating. But in some cases, males do build little nests in order to show their value as a potential mate.

Other ways a bird shows off involve noise and calling to one another, as well as scavenging. But enough of laying down the guidelines, let’s talk about some birds. 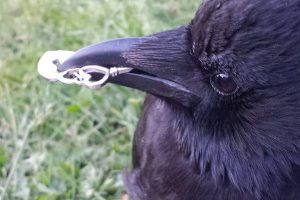 Which bird shows off the most?

I think the best way to do this short of looking at every single species of bird (there are around 10,000 and i don’t think either of us has time for that) is to look at good examples for each category.

Starting with plumage, I’d be remiss not to mention the most iconic boasting-bird, the peacock. Peacocks are a good example of plumage dimorphism, with female peahens being much duller and lacking the gigantic tail feathers. The peacock’s most well known trait, the aforementioned tail feathers, are used to show females how mighty and impressive the male is. They’re beautiful and bold, with vast arrays of colours and mystical patterns that even a human could get lost in. 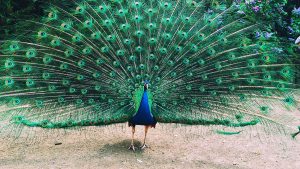 Anyway, moving on to nest-building behaviour, i want us to look at weaver bird. This describes any bird (usually small finches) that weave nests using grass stems and other plant fibres. Male weaver birds often build small, flashy nests to attract mates possibly in an attempt to show their value as a father.

An thunderous category indeed, let’s discuss some noisy birds. The white bellbird holds the title of loudest bird on earth. Scientists have recorded mating calls from them as loud as 125 decibels. To put that in to context, only 120 decibels is required to cause hearing damage and your average sports or concert crowd reaches 120 decibels. Imagine just ONE humble bird making all that noise. Insane.

It has actually been noted that white bellbirds can sometimes cause hearing damage to their potential mates, so I’d definitely argue that this bird shows off if not the most, but the hardest.

Watch this video from the Guardian News on YouTube to hear for yourself how loud this bird can be: