A zebras black and white colouring helps it maintain an optimum temperature. Black absorbs the most heat, whereas white reflects the most.

But why is this important?

It’s all well and good to say which colour absorbs more heat and which absorbs less, but we must ask why?

Since I’m no physicist, I’ll give you a nice explanation from UCSB science line: So now that we understand the interactions between colour and light, let’s talk about how this applies to zebras.

Zebras spend all day in the blazing sun, for many hours longer than other animals like antelopes native to the same regions. This is possible because their stripes are alternating not only in colour but in temperature. A zebras black and white stripy pattern means they are striped in rows of temperature, varying by about 30 degrees each stripe.

Once again without getting too technical, this alternating temperature pattern creates small convection currents on the surface of the skin. These currents speed up the evaporation of sweat, thus cooling the zebra down faster. Isn’t that amazing!

Other black and white animals

Being such a nifty evolutionary quirk, one must imagine there’d be thousands of other creatures following suit. There may not be thousands, but there are a good few black and white creatures out there, let’s talk about a few of them.

First of, we have the penguin! Miraculously, a penguin’s black and white colouring helps it to stay camouflaged from predators. You may be wondering how this is possible, but it’s actually very intuitive. From below, a penguins white belly blends in nicely with the light filtering down from the surface. On the other hand, their black backs are a more apt fit for the colour of the deep ocean! That means that no matter if the predator is above or below them, the penguin is camouflaged.

Moving on, we have the beautifully round giant panda! A good way to summarise their black and white colouring is to say it’s a compromise. Because their environments are snowy in the winter and hot in the summer, they need to be able to survive in a range of temperatures. This is similar to the zebra, with the different colours absorbing different amounts of heat and helping pandas stay toasty when it’s cold and cool when it’s hot!

Dalmatian’s are an interesting example of a black and white animal. This is because they only have black spots because we decided so. Much like every other breed of dog, they have been selectively bred over many many generations to produce ‘desirable’ traits. In this case, a lovely white coat with striking black spots. One only has to see and feel a Dalmatian to understand where Cruella De Vil was coming from. 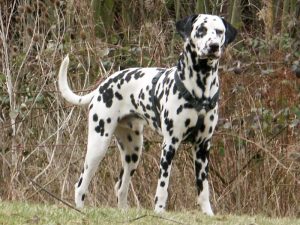 After all this, i hope you’ve gained a new appreciation for black and white animals; the stories behind these colours are usually very interesting!