These large herbivores often live in groups of 10-20, making them highly sociable and causing other animals to, well, LOVE capybaras. And who can blame them?

Being herbivores, they have absolutely zero prey and therefore don’t particularly pose a threat to any other species. They are extremely friendly and don’t particularly care what you do around them, as long as they don’t get hurt. These and many other factors contribute to capybaras being one of the most lovable creatures on the planet.

Living in herds of around 20 other capybaras, they are extremely sociable animals that quickly become depressed if left alone. As i said before, they’re herbivores and have no natural prey. Their territories sometimes overlap with other animals but in those cases they just chase of any intruders and leave it at that. 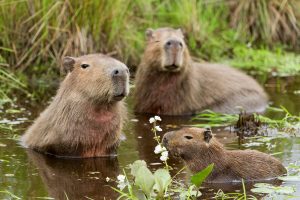 Their predators are limited, with the small group including jaguars, anacondas and harpy eagles to name a few. These predators pale in comparison to the main threat to capybaras however, that title belongs to none other than humans.

We hunt then for their meat and their hide which can be used as food or clothing respectively. Despite this, most capybaras show the same level of friendliness towards humans as any other animal. They’re just that nice.

In fact, the only reason you SHOULDN’T approach a capybara is the potential of it carrying fleas! Well, that and if it’s hanging around with a crocodile.

Weighing in at up to 75kg and measuring a whopping 1.4m long, capybaras are the largest rodents in the world. This often leads to them being used as a sort of public transport with other animals like small birds and monkeys hitching rides. Seriously, imagine a monkey riding around on the back of one.

There are many photos floating about of capybaras lounging, chilling and otherwise looking unbothered by such animals as cats, monkeys and even crocodiles. I don’t know about you, but the latter was definitely the biggest shock to me.

Crocodiles have a reputation as one of the deadliest creatures on earth, and yet here they are having a snooze next to a stocky rat-pig! An unbelievably heartwarming fact is that, because of their caring, sociable tendencies, capybaras often become adopted mothers to orphaned animals. There are stories of them adopting orphaned dogs, deer, turtles, cats, you name it.

Being partially aquatic, capybaras spend a lot of time near water. They mate in water, use it to escape predators and just generally like to lounge near it. Water sources are naturally popular locations, acting as sort of gathering places for the creatures of the world. This probably plays a part in all the sightings of increasingly bizarre animals cuddling up to capybaras. They end up at the same watering hole and can’t resist! 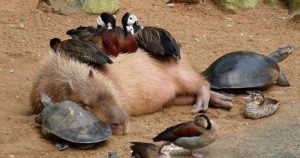 If you ever visit a wildlife park, zoo etc, that has capybaras, you’ll often find them mixed up with other species like rabbits. Sometimes, you can even enter the enclosure to say hello, that’s just how friendly they are.

Truth be told, we can only guess as to why and how they became so well-liked, but one thing we know for certain, animals LOVE capybaras!