Since lizards are cold blooded, they spend the winter months hibernating if they are native to a cold climate. If they live in tropical areas, lizards only hibernate to escape the summer sun.

Common house lizards are found on every continent except Antartica, so it’s likely you’ve seen one out in the wild. But in the cold winter months, how do cold-blooded creatures survive?

Lizards maintain their body heat using their surroundings. As a result, in temperate areas like the UK, the weather makes it difficult for them to survive the Winter. Their internal activities slow down, and they cannot move quickly to catch prey for food or run from danger. Therefore, house lizards hibernate somewhere safe and well insulated until the Spring.

Where do lizards hibernate?

In common with other small reptiles, lizards can hibernate inside a rotting log or under deep crevices in rock. In places with especially cold winters, they must burrow under the frost zone to stay warm enough to survive freezing temperatures. They may find caves or animal burrows to hide in. Some lizard species such as geckos build up a storage of fat in their tails through the year. This store allows them to survive the long hibernation period without food.

Some lizard species live in trees in areas such as Mexico and Texas. During hibernation, they access an older tree partially hollowed out on the inside, or retreat under a slab of bark.

In deserts, lizards hibernate for much longer than lizards in other parts of the world.

If you live in an area with a cold climate, you may have considered allowing wild lizards to stay and hibernate in your home over the winter months. In fact, wild lizards can fairly easily be kept as a pet, as long as you’re able to capture them safely. If you were thinking of keeping a lizard as a pet, this is actually a much more environmentally friendly method than purchasing from a shop. There’s no risk of your lizard escaping into a foreign ecosystem and becoming invasive.

A 20 gallon terrarium is a large enough house for a couple of lizards to live. They’ll need a good absorbent floor lining, and a heat lamp. Even if you maintain a fairly high temperature of 25-30 degrees in the terrarium, they’ll still hibernate. Though they could easily survive through the winter with your help, hibernation is still in their natural instinct. You can find out more about taking care of lizards here. 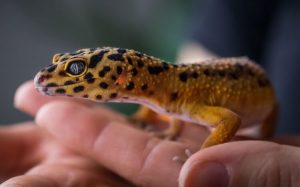 Hibernation in the summer

In the tropics, the constant hot temperatures mean lizards don’t need to hibernate over the winter months. However, it can sometimes reach temperatures that are too hot even for lizards. In the summer, they may retreat to similar areas as winter hibernating lizards, such as under bark and rocks.  However, rather than over a span of weeks, it is more common that they will hide in this way for only a couple of hours a day. This allows them to cool off before going back to catching prey. 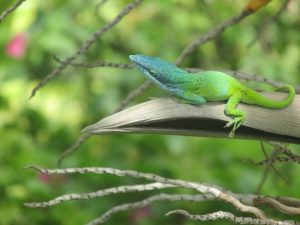 The natural cycles of lizards within a species are synchronised. This means the members of a population will typically begin hibernating around the same time. In some cases, lizards will defend their retreat for hibernation against others. In areas where suitable hideouts are rare, a group of lizards may hibernate together. This is also common in colder countries, where the lizards can huddle together to maintain their warmth. 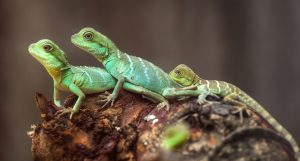 Want to learn even more about animals? Animal-Club provides animal parties or animal handling workshop where your will be able to see, learn and interact with the reptiles and other wonderful animals with the help of our presenters. Our mobile zoo has many friendly animals such as rabbits, tarantulas, geckos, vinegaroons and more that will be perfect for an animal party. We can also come over to your school for an animal school visit or arrange for an animal workshop with us where the children can learn about animals and have fun too.