Young wild rabbits, born in Spring, begin breeding as early as October or November the same year. Domesticated rabbits follow the same pattern. As a result, domestic rabbits can be bred in Autumn so that their first litters are during winter.

You probably know that most wild animals in the UK have babies early in the year. This is usually because there is lots of food available from the warmer, rainier weather in Spring. But what about rabbits, who don’t hibernate in Winter, and have nice, warm burrows to keep their young safe all year around?

Why do wild rabbits have babies in winter?

During the first rabbit breeding season in Spring, male rabbits fight to compete for mates. This uses a lot of energy, and can create injuries. Between July and October, the rabbits stop breeding so they have time to recover. They store excess energy as fat for insulation. This makes them more prepared for the harsh winter months and a second chance of breeding.

With this preparation, some rabbits have a litter in winter, although this is generally quite early for the rabbits born that spring. If they do have babies in winter, the less rich food sources means that litters are smaller. Only three or four survive to a few weeks old, and most of these will be taken by predators.

However, since adult rabbits breed again almost as soon as a new litter is born, the population grows steadily. 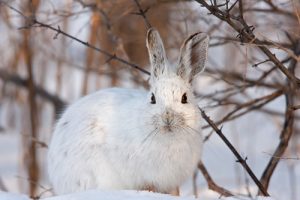 Can domesticated rabbits have babies in the winter?

As wild rabbits have babies in winter, a winter litter can be seen as part of a rabbit’s natural rhythm. This natural rhythm means that if you are breeding rabbits, you may notice that they are more willing to breed between October and December than in earlier months. Baby rabbits are called kittens or kits and they come in litters of seven on average.

To prepare for a litter of rabbit kittens, a hutch with shelter on all sides must be provided. Adding several adult rabbits to a single hutch can be an effective way to keep them warm during winter. However, as it is breeding season, two rabbits of the same sex cannot be kept together, as they may fight.

You don’t need to add space heaters as they carry a risk of fire damage, and adult rabbits can easily survive freezing temperatures. When the baby kittens are born, however, extra supplies must be given.

Looking after baby rabbits in winter

Your rabbits will need a lot of support in order to keep as many kits (baby rabbits) alive to adulthood as possible. Their hutches must be kept draught-free and dry to prevent frostbite. A piece of cardboard with a layer of pine shavings at the base of their nest box can act as insulation. If you’re particularly worried about the kits, the whole hutch can be placed within a closed shed. 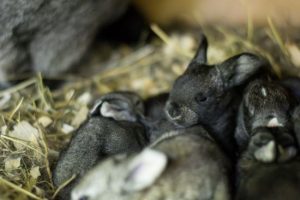 How do wild rabbits survive the winter? 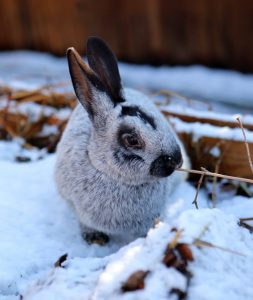 Wild rabbits build burrows in winter, where the temperature deep in the ground is usually stable and warm. The burrow keeps them safe from wind, rain, and snow. The rabbits also grow a thick layer of fur to keep warm while they are living in their burrows.

During the course of winter they usually remain in their burrows. Since there isn’t a steady supply of their usual foods outside, they use the store of fat they have built up over the year to stay alive. The burrow also acts as shelter from predators, so overall their kits are well protected.

Having more than one litter every year means that the rabbit species can survive harsh winters, lack of food and the many predators. It also means that your rabbits can can produce many offspring. You must be careful that your group of pets doesn’t grow out of control!

Animal-Club provides animal parties or animal handling workshop where your will be able to see, learn and interact with the wonderful animals with the help of our presenters. Our mobile zoo has many friendly animals such as rabbits, tarantulas, geckos, vinegaroons and more that will be perfect for an animal party. The children can learn the skills and know-how required for their very own pet. We can also come over to your school for an animal school visit or arrange for an animal workshop with us where the children can learn about animals and have fun too.