In the year 1931, George Mottershead founded the Chester Zoo. Today, it is one of UK’s largest zoos. The BBC drama named, ‘Our Zoo’ was based on Mottershead’s life and how he founded the zoo. It discusses the emotional support that Mottershead found in animals. Mottershead had returned from World War I and suffered from shell shock. As he cares for the animals, he begins to overcome his own psychological demons. Eventually, his dream of a zoo with no bars takes form as Chester Zoo.

A little less than a century later, the origins of Chester Zoo exemplifies what we call Animal Therapy. It is a type of therapy where animals help people cope with trauma, pain, or health problems. Animal-assisted therapies usually involve pet dogs, but there are lots of other animals that are being used as well. Additionally, animals also provide comfort and enjoyment for people, which makes recovery easier.

A 2002 study conducted by the State of New York University underpinned this too. The study showed how people who had to conduct a stressful task felt less stressful when accompanied by pets. Several studies also indicate the children who grow up with a pet in the house at an early age tend to have a stronger immune system. They are also less prone to developing related allergies. 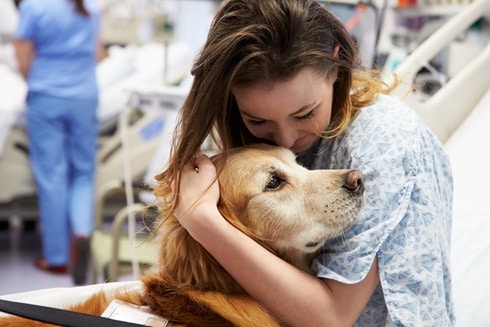 Children with Attention Deficit Hyperactivity Disorder (ADHD) can benefit from pets too. Pets encourage children to focus on responsibilities. Other studies also prove animal therapy to be helpful for dyslexic and autistic children. The fact that pets do not judge you makes it more comfortable for children to be in their company.

The York Retreat opened in 1796 and has since used animals in treatments. In its early days, most of England resorted to crueler techniques of handling mental illnesses. Today, animal companionship is recognized as one of the ways in which patients can reduce the stress of treatment. Rehabilitation organizations have also started using animal therapy to help people overcome substance abuse and other addictions.

Who can receive animal therapy?

Anyone trying to overcome pain, trauma, anxiety, depression and a range of health problems can receive animal therapy. Research shows that pet owners are less inclined to suffer from mental or physical illnesses. As a result, not only the person receiving animal therapy but friends and families who sit in feel better too. You will find colleges, universities, schools, and care homes using pet therapy to foster mental and physical health.

Are there any risks involved in pet therapy?

For most part, pet therapy produces positive results. Any risks involved in the therapy may come from a lack of strict rules regarding safety and sanitation. A pet which is certified to provide therapy should be trained for the same. Additionally, they must display excellent sanitation skills, should be clean and vaccinated to reduce risks. Animals need a lot of care as well. Pet owners or animal therapy providers put a lot of time and effort in the animals.

Animal Club conducts animal workshops and animal school visits to bring children closer to animals. We conduct animal handling workshops in schools, corporate organizations, and even care homes. Our animal parties are also full of fun and excitement where children get to learn more about animals. Every animal party involves lots of animal therapy for the children as well as adults. We take a lot of care for the animals we raise. Many of our pets are displaced from their original homes, and they enjoy the love and care they receive from visitors.