Animals are cloned by placing the chromosomes from one animal into an egg cell. An embryo is then produced which is genetically identical to the animal. Cloning animals provides benefits in agriculture and medicine, and can even be used to make copies of pets. The most famous example of cloning an animal is Dolly the Sheep.

How was Dolly the Sheep cloned?

In 1996, scientists at the at the Roslin­ Institute in Edinburgh, Scotland, produced a clone of a sheep, which they named Dolly. Dolly was representative of a huge advancement in cloning, as she was the first ever cloned mammal. 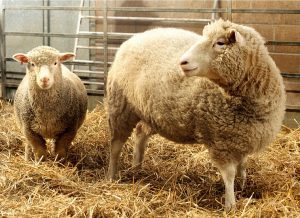 Normally, egg cells contain half the required chromosomes, ready to fuse with a sperm cell which contains the other half. This produces a cell with a completely unique set of chromosomes, since each half came from a different parental source. After this fusion, the cell rapidly divides into many more cells to create an embryo, which develops into a sheep.

However, in order to produce a clone of a sheep, the embryo needed to have identical chromosomes to the sheep, instead of a unique mix. They did this by replacing the half set of chromosomes within a sheep egg cell with a full set taken from an adult cell of another sheep. They then stimulated the egg to divide as if it had just fused with a sperm cell. This produced an embryo with an identical set of chromosomes as the adult cell. The embryo then grew to produce Dolly, who was genetically identical to the sheep the adult cell was extracted from. Dolly had no genetic similarities to the sheep the egg cell was taken from, as all the chromosomes had been removed. 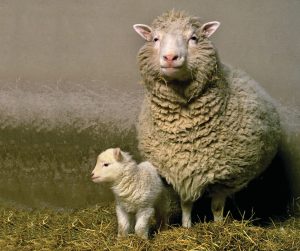 Dolly and her first lamb, Bonnie

Why are animals cloned?

The method used to create Dolly, called reproductive cloning, allows scientists to make copies of animals that have genetic benefits in medicine or agriculture.

For example, an individual cow with chromosomes which cause it to produce a larger amount of milk than other cows may be cloned to produce lots of cows with the benefit of higher milk production. Milk and meat from cloned animals has been confirmed to be safe, and can be sole legally in the UK. However, this is rare, as cloning is very expensive.

Another use of cloned mammals is in drug testing. Different forms of treatment can be tested on the same genetics using several clones. The effects can be compared without worrying about differing genes skewing the results.

A more eccentric use of animal cloning is to create copies of a beloved pet. In 2018, Barbara Streisand revealed that she had used cells from her deceased dog to produce two identical clones. However, even though they contain the exact same genes, the dogs wouldn’t be exactly the same. They would not have the same training, personality or memories as the original dog. 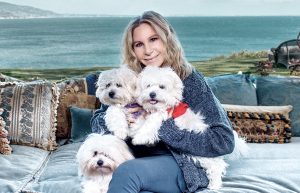 Could humans be cloned?

Technically, scientists could try the same method that was used to produce Dolly the Sheep to make a clone of a human being. However, there are a range of ethical issues surrounding this topic, so it has never been attempted. This means we can not yet be certain if human cloning is actually possible.

To give some perspective, 276 attempts were made until Dolly was produced. Human beings are much more complex than sheep. We can’t even be sure attempts to clone a human would ever be successful. And with 7.9 billion people in 2021, there isn’t really any need for a cloned human anyway!

Animal-Club provides animal parties or animal handling workshop where your will be able to see, learn and interact with our friendly animals with the help of our presenters. Our mobile zoo has many wonderful animals such as rabbits, tarantulas, geckos, vinegaroons and more that will be perfect for an animal party. We can also come over to your school for an animal school visit or arrange for an animal workshop with us where the children can learn about animals and have fun too.