In recent years, the number of wildfires reported by countries around the world has gone up. The recent Amazon fires and the wildfires in Australia have caused considerable destruction to the flora and fauna. While some animals may be able to escape, others do not stand a chance of survival at all. But escape still does not mean that they will be able to comfortably settle in a new section of the forest. Areas are usually marked by the animals who do not want others to trespass into their lands.

Large animals like those the feline family and the ape family can run quickly and get out of danger’s way. Their chances of survival on a new patch of land are also relatively easier. Amphibians and reptiles, on the other hand, live in microhabitats which can quickly disappear in a big wildfire. Once their homes are lost, the chance of survival for these amphibians and reptiles is extremely low. Their eggs and offspring are either lost to the forest fire or maybe abandoned during their flight for survival.

Birds face a similar fate. They can either fly away from their natural habitat leaving their nests, chicks and eggs or lose their lives. Small and slow animals like the Giant African snail tend to panic quickly in a fire. Their chances of escape are nearly negligible since the forest fire would kill them before they can move to safety. 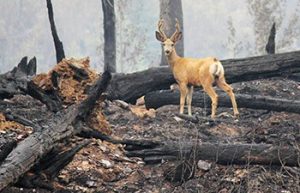 Escape is only the first step to survival for the displaced animals and birds. The patch of land affected by the fire is rendered unfit as a habitat for animal species living there earlier. This is because a wildfire would typically destroy the foliage and canopy which made the forest environment ideal for the animals who lived there. Insectivorous birds and animals like the pac man frogs prefer the damp forest floor which ensures that they can easily kill their prey without the crunching sounds of dry leaves. There are many other animals who prefer the protection of the canopy to avoid the harsh sun.

So, even after the forest fires die, the animal species who would move into that patch of land will be those who naturally live in dry areas at the edge of the forest. The original residents of that patch of land will be forced to find a new home. They may encounter hostility from the existing animal species in the new territory making survival a concern even after escape from the fires.

Impacts on the long term

The inter-dependency of animal species on each other is altered when a fire affects their homes. Animals that escape the forest fires, may suffer in the long term since they are left with the only option of finding a new habitat for themselves. It creates an ecological disbalance which also affects the animal species which may have survived and continue to live in the same patch of land. The unavailability of food and the change in habitat requires the animals to evolve introducing long term changes in their survival instincts.

Animals are not the only species affected by wildfires; humans suffer its impacts as well

Even human settlements in the forest regions and humans who are dependent on the forests for livelihood are affected greatly after a wildfire. They may end up being displaced or may lose the source of their livelihood. Many tribal communities living in the Amazon forests were dependent on hunting tortoise and capybaras for their livelihood. These slow-moving animals stood a low chance of survival in the fires. As a result, the tribal communities have to cope with the loss of their homes and livelihood.

Animal club holds animal workshops and animal parties to foster meaningful relationships between humans and animals. We encourage children as well as adults to participate in our animal handling workshops to better understand the animals. Many scary animals like snakes that may seem dangerous are often misunderstood. Through an animal school visit or an animal party we help children and adults learn to care for these animals. Consequently, we hope that this improved understanding of animals can reduce our negative impact on nature and improve wildlife conservation efforts.