The Amazon rainforest, located in South America, is the lungs of the earth. They are rich in flora and fauna, which have a wide stretch of approx two million square km. Its territory touches the nine nations of the South American continent. But the majority portion is shared by Brazil, which is 60% of the rainforest. These forests are luxurious in biodiversity with the highest collection of animals and plant species. It harbors one in ten known species in the world. There are around 427 species of mammals, 428 species of amphibians, and 378 species of reptiles.

Some of the animals living in the Amazon rainforest

This sloth is one of the species of the three-toed sloth. They are similar in size and weight like three-toed sloths with relatively shorter tails. Their foot comprises three fingers ending in curved claws, which are 7-8cms long on the front feet and 5-5.5 cm on the hind feet. There are not any significant comparatives between the body sizes of males and females. They are famous for oversleeping and laziness, as they can sleep around 15 to 18 hours every day and show some activity for a very short period. Although they are capable of swimming and walking on the ground they prefer to spend most of their time on trees. Brown-throated sloths descend only to defecate once in a week. They practice a polygynous mating system with a gestation period lasting for seven months. 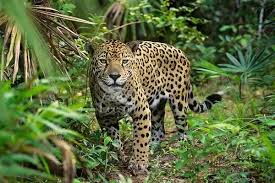 South American Jaguars weigh up to 91kgs, thus heavier than those found in central and North America. These south American jaguars usually feed on capybara and peccary. Today these amazing creatures are facing threats like illegal trafficking, removal of their natural habitat, and conflicts with humans. They are the third-largest cats found in the world after the tiger and lion. The fur contains rosettes which help them to camouflage in the forest. Their gestation period lasts for 93-105 days, after which females take care of the cub.

They are known for their loud howls, which can be heard even at a distance of 5 km in dense Amazon rainforest. Howler monkeys can smell food from a distance of 2 km. Their nose contains round nostrils with much sensory hair on the inner side and their ranges range from 56-92 cms excluding their tail. The length of their tail is 5 times their body. Howler monkeys have trichromatic color vision, unlike other monkeys. They are the only folivores monkeys that feed on leaves, fruits, flowers, and nuts.

Their fur is grey with yellow speckles at the chest. They are unique because of their long white beard. Emperor Tamarin weighs only up to 500 gms with body size ranging from 23-26 cms. They are seasonal breeders, and their gestation period lasts up to 6 months. Emperor Tamarin shows a polyandrous mating system, and males are likely to contribute more to parental care. They survive on fruits and flowers along with gums and saps of trees.

They have a very short tail and bald head along with a long coat and bright crimson face. Being arboreal helps to save themselves from floods that usually occur in the rain forest. As the dry season approaches, they get down from trees and search for food, which mainly comprises seeds, fruits, flowers, animal prey, and buds. The bright red face of bald Uakari is considered a sign of good health and helps them to choose a healthy mate for reproduction. Their gestation period lasts for approximately six months. Excessive forest loss and human causes are two major live threats to Bald Uakari.

The name because they feed on blood along with nectar, pollens, insects, fruits, and meat. They have front teeth used for cutting purposes. Their back teeth are smaller as compared to other bats. Vampire bats can easily walk, jump, and even run using their unique gait, unlike other bats that have lost these abilities. These bats are immune to endogenous retrovirus and use infrared ability to locate their prey. They prefer dark places like empty caves, old wells, hollow trees, and abandoned buildings.

The contribution of Animal Club in enriching the knowledge about different animals through the concept of mobile zoo and animal parties is appreciated by many schools and parents. We consider the involvement of children important to save flora and fauna of our earth. Therefore, we offer animal school visit and animal handling workshop to enhance their affinity towards the hidden world of vast species. Animal club is the perfect destination to refer if you are thinking of organizing an animal party or an animal workshop for your students.